A tense finish in Enfield and Éire Óg nicking victory at the death against Clann na nGael were some of the main story lines from the first round of intermediate club action, while Castlerea’s tally of 2-17 would suggest that they could yet force themselves into the reckoning in this championship, particularly if they get a few key players back on board by the business end of proceedings.

11 of the 12 teams that were in action are represented on the first Roscommon Herald IFC Team of the Week of 2022; did the men who caught your eye sneak in there?

It was a steady eddie display from Fallon, who kept it between the ditches until he was needed to step up in the second half to make a crucial save to deny Shane Crowe what possibly could have been a game-winning goal.

Held his man scoreless from play, got a few nice tackles and dispossessions in, and generally added an air of security and confidence to the Kilmore back line. The North Roscommon club are quite limited this year, but defensively they have a lot going for them – not least their full back.

In the absence of Conor Devaney due to suspension, Kilbride’s attacking threat was disproportionately weighted onto the shoulders of Daniel O’Neill, and a patient, disciplined performance from Callaghan ensured that O’Neill never looked like running up the type of tally that his team needed. From a statistical perspective, it would look as if Callaghan did very little, but he consistently squared up O’Neill, and through good footwork and body position, forced the Kilbride man to recycle backwards. Job done.

We’re taking our first positional liberty by moving Browne back one line, switching him from left wing back into the corner, but his persistent ability to break the line and put his team on the front foot meant that he simply had to be included. There’s no doubt that he would comfortably do a good job in this position either, where his pace would be a vital asset.

Chipped in with one good point, looked after his defensive duties, and generally thrived on a warm afternoon on the open field that is Dr. Hyde Park. As a club, St. Brigid’s have plenty of players that can fill this role at senior level, but they wouldn’t be let down if they had to ask Smith to step up to senior football.

Wasn’t as dominant as he can be, but the county man still held the anchor position in the St. Dominic’s defence very well, and even operating at perhaps 70% of full speed, he looked like a class act in Saturday’s contest. 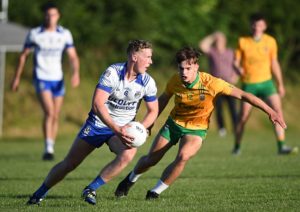 Clann have found another gem of a player in their young wing back, who was the star of the show in Loughglynn on Sunday. Whether attacking and in possession, or in defence, Gavin is full of energy, always in the face of his opponent, and really sharp on the ball when he gets his chance, as evidenced by his goal.

St. Brigid’s were six-point winners over St. Aidan’s on Sunday, but it was in midfield where they dominated, monopolising possession and keeping the flow of play moving one direction, particularly in the first half. McDonnell was at the heart of that, winning kickouts, taking up good positions and keeping pace on the play when on the ball.

This was a close call between Muldoon and Shane Dowd from the same game, who alternated between midfield and centre forward at various stages. Dowd offers plenty of scoring threat on the ball, but Muldoon is a solid anchor in this position, while he also did well from dead balls and from open play when the chances came his way.

St. Aidan’s scoring threat came in two forms on Sunday – long deliveries into Johnny Coyne in the full forward line, and Eoin Fallon’s ability to run at the opposition defence and add a clean finish. Already it looks like their upcoming battle with Shannon Gaels will be a crucial contest in the relegation battle, and they’ll need another big performance from the form Roscommon minor captain when that game comes around.

Cox is simply a scoring machine. There aren’t a lot of frills and decorations to what he does, but at this level of football, his ability to just put the ball over the bar consistently and repeatedly is invaluable. Eight points, six from play, albeit with a lot of them arriving after he switched to full-forward, is yet another excellent haul. 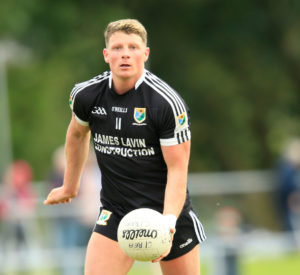 Lavin showed maturity beyond his years in his performance in Kilmore, playing as a point-guard style player in the middle third of the field and orchestrating the play all around him. He also chipped in with two vital points at the end, just when his team needed them.

It’s no exaggeration to say that the Kilbride defence was almost shambolic on Sunday afternoon at O’Rourke Park, but taking advantage still isn’t a formality. McDermott made it look easy however, racking up 1-6 at his ease, including a superb solo goal.

1-9 out of his final tally of 1-10 might have come from placed balls, but clinically punishing opposition transgressions is a vital skill, and when Donnelly is on the field, opposition defences are kept honest in the tackle because they know they can’t afford to concede dead ball chances. Donnelly was also the man fouled for his own penalty, towards the end of the first half.

Seven points, three frees, one mark, three from play – Corcoran has evolved into the main scoring threat in the Shannon Gaels forward line, and as he adds more physical strength and power to his game, he will become an increasingly significant player in the Roscommon intermediate championship. Corcoran narrowly edges out Damien Goggins, who scored 1-3 for St. Croan’s but also missed a first-half penalty. 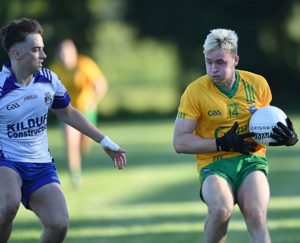 Filed under: Roscommon GAA, Roscommon IFC, Team of the week