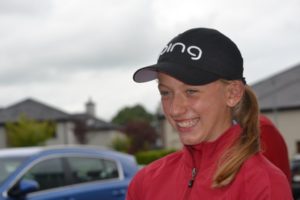 Olivia Costello has reached the last 16 of the R&A Girls’ Open Championnship.

A Roscommon golfer will compete in the last 16 of the Match Play competition at the prestigious R&A Girls’ Open Championship at the world-famous Carnoustie in Scotland this morning.

Olivia Costello from Roscommon Golf Club will play Emily James from Royal Lytham and St. Annes in Wales, with the match getting underway at 10.50 a.m.. She is the only player from Ireland left in the tournament.

The R&A Girls’ Amateur Championship was first played in 1919 and is a highly coveted junior title. The competition attracts players from all over the world.

Past winners include major champions and Solheim Cup players such as Anna Nordqvist, Suzann Pettersen, Azahara Munox and Georgia Hall.