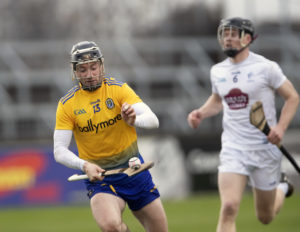 All six clubs still in contention to win the Mickey Cunniffe Cup know their path to glory after this afternoon’s double header in Athleague, which confirmed that Pádraig Pearses and Four Roads will take the two automatic semi-final slots.

Four Roads’ place in the last four was guaranteed regardless of the outcome of their clash with Athleague, but John Cunniffe’s side still put in a strong showing to easily outclass the reigning champions, 3-22 to 1-18.

Goals at either end of the first half from Brendan Mulry, 1-11 from Cathal Dolan and really strong showings from Cormac Coyle, Micheál Kelly and Conor Coyle along the spine of the defence and midfield ensured they were in complete control against a misfiring Athleague side, and could afford to rack up 20 wides as well as their 25 scores. Ben McGahon shot 0-13 (0-10f) and Cormac Kelly pulled off a wondergoal for Athleague, but they were always a distant second best.

Pádraig Pearses are also into the last four after they put St. Dominic’s to the sword, 3-23 to 1-9. Pearses opened with a goal after 30 seconds from Dara Finn, but despite this the first half was very competitive, and with Micheál Byrne controlling midfield and Naos Connaughton knocking over his early frees, St. Dominic’s stayed in touch. A goal from Connell Kennelly helped them to lead by 1-7 to 1-5, but from then on it was one-way traffic as Pearses completely took over. Daniel Glynn shot 0-12, Dara Finn added a second goal, Matthew Comerford hit 1-1 and substitute Seán Canning put his hand up for automatic selection in the semi-final as he shot 0-3 in an eye-catching cameo role after coming off the bench.

So with the dust settled on the round robin stages, the knockout lineup looks like this:

Early goal leaves Pearses with too much to do in Cavan