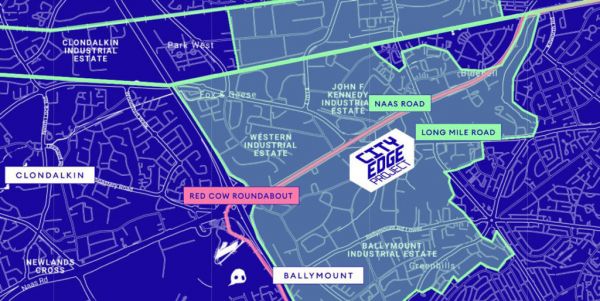 Plans for a new car-free town in west Dubin that would include 40,000 homes and 75,000 jobs have been revealed by Dublin City Council and South Dublin County Council.

The City Edge Project is a joint initiative between DCC and SDC to create a “new liveable, sustainable and climate resilient urban quarter at the western edge of Dublin City”.

The project area covers 700 hectares within the Naas Road, Ballymount and Park West areas and has the potential for 40,000 new homes and 75,000 jobs, “that would contribute €13bn GVA a year to the economy”.

This makes it “one of the largest regeneration opportunities in Europe”.

The City Edge area is already a cornerstone of the Dublin economy with some 1,500 businesses employing 25,000 people, alongside well-established residential communities of 5,000 people.

However, City Edge is identified in national and regional policy as a part of Dublin that has the potential to be much more intensely used.

Located at the western edge of Dublin city, within the M50 and only 15 minutes from the city centre, this large brownfield land bank is the logical ‘next step’ in the sustainable growth of Dublin.

The City Edge Strategic Framework sets a vision for the future of these lands, “whereby their intensification can play a central role in the sustainable growth of both Dublin and Ireland”.

This aligns with Government policy for ‘Compact Growth’, whereby development is focussed on land close to cities where new and existing communities will be able to avail of public transport, walking and cycling and amenities such as parks, schools and community facilities.

“Regeneration of the City Edge area will make a significant contribution to the delivery of much-needed new homes and jobs, which in turn will generate sizeable economic, climate and social benefits for the country,” according to the project document.

“Realising the scale of ambition presented in the framework will require strong governance as well as sustained political and economic support. There are sizeable infrastructure deficits that require the coordination of state agencies and upfront investment to push forward early infrastructure delivery to unlock the long-term potential of this strategically important project.

“The next step will be to prepare draft Variations (amendments) to the Dublin City and South Dublin County Development Plans to provide the statutory basis for more localised plan(s) and policies, with further public consultation as part of this process.”