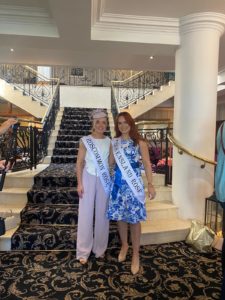 Roscommon natives Bernie Ryan and Eimèar Naughton will feature in the televised Rose of Tralee finals, taking place in Tralee on August 22nd and 23rd, and hosted by Dáithí Ó Sé.

The Rose of Tralee makes its long-awaited return after a two-year absence due to the Covid pandemic.

Bernie is a native of Roscommon Town and currently works as a Nurse Manager in the Critical Care HDU in the Mater hospital. She has worked alongside the Organ Donation Transplant Ireland team and is always keen to promote awareness around organ donation and end of life care.

Our Roscommon Rose is also passionate about sport. She plays Gaelic football for the Roscommon Gaels ladies’ junior team and is also an avid runner.

Eimèar, a native of Athleague, is this year’s Queensland Rose. Eiméar lives in Brisbane, Queensland, where she moved to in 2015 and works as an English and history teacher.

The Roscommon connections don’t stop there though; the London Rose, Hayley Reynolds’s father Martin is from Strokestown. Hayley has also made it through to the televised finals.