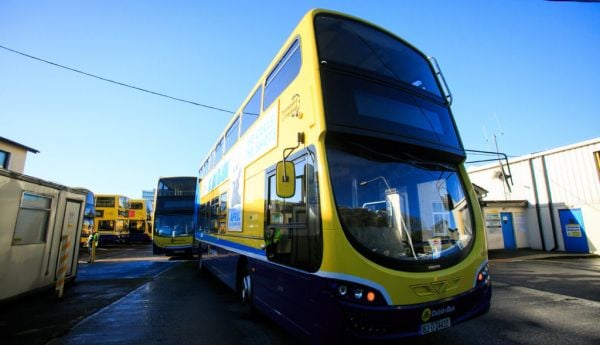 Elected representatives are being called to demand the Government include funding for a dedicated transport police service as part of Budget 2023.

The assistant general secretary of the National Bus and Railworkers Union (NBRU) Tom O’Connor made the comments following reports of a suspected homophobic assault on a young man on a Dublin Bus in the early hours of Sunday morning.

“Unfortunately, this type of behaviour is on the increase” he told RTÉ Radio’s Morning Ireland.

The NBRU has been calling for a dedicated transport police division for some time, he said, adding it was the only option to stop “this type of behaviour”.

Mr O’Connor said the number of assaults on transport staff has also risen, with five incidents in the past two weeks.

It was time for the public to call on TDs “to get some of the surplus” to be utilised for transport police in the forthcoming budget, he added.

When asked how drivers have been instructed to respond in a situation where there is an assault, Mr O’Connor said his members had been told not to get involved as they were not bouncers or security.

“That’s why police are needed,” he explained. He added that private security companies currently operating on some public transport services do not have the authority to make arrests.

Mr O’Connor said, at present, 71 per cent of journeys are made by private car, arguing that people are not going to switch to public transport if they do not feel safe.

The National Transport Authority (NTA) is spending millions on the Bus Connects project, which would be a waste if people were not prepared to use public transport because of safety concerns, he added.

The NTA know the “problem hot spots”, so there would not be a need for transport police on every route, he said. If there was a dedicated force it would mean that people would think twice before misbehaving, he said.

“People are tired of the behaviour on buses. These are real people getting hurt. That man who was attacked is somebody’s son.”

It was something that seriously needed to be considered and aligned with efforts to encourage people to use public transport, he told RTÉ radio’s Today with Claire Byrne show.

Anti-social behaviour on public transport was a long-running problem, but the existing Garda resources could not be stretched to include a transport division, he said.

A dedicated transport unit would have to be separately funded, he said.

His own preference would be for a separate transport police force which would have powers of enforcement and access to holding facilities and the legal system. That would be more appropriate as was the case in the UK. That would be more effective. There should also be a community orientation aspect of such a service, he said.

Mr Leahy said that a transport police service should be uniformed which was important from a community policing approach so that people would engage.

Fianna Fáil was conducting a survey of the public for their views on the subject.

Mr O’Callaghan added that the point raised by Garda Commissioner Drew Harris about garda resources was legitimate. Investment in the force was needed to address the growing population, to encourage more to use public transport and the expanding workload of the force as more laws were passed.

We have to ensure that people feel a sense of security when using public transport.

A transport police unit should happen as soon as possible, he urged. “We have to ensure that people feel a sense of security when using public transport. We have to be realistic with this approach.”

However, Dublin City Councillor Niall Ring opposed a dedicated transport police unit and said that more gardaí on the street would be a better deterrent. The Garda service was already stretched in terms of resources and the transport companies could afford to use their profits to fund better security.

Mr Leahy said it was not an ‘either-or’ situation and that a transport unit could not take from the current Garda resources. “It has to be new.”

Mr O’Callaghan agreed that there should be more gardaí on the street. He pointed out that the transport companies were aware of the problem areas where transport police could be more visible.