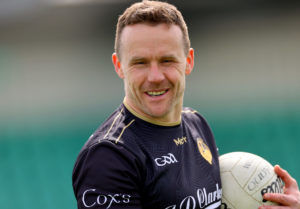 Former Mayo captain and current Ballaghaderreen player, Andy Moran, has admitted that he didn’t like the way his recruitment process to find James Horan’s successor was handled by his native county.

Former Footballer of the Year Moran, the current Leitrim senior football manager, said that the way the recent search was played out in public didn’t sit easily with him.

“I didn’t like the way the process of selecting a (Mayo) manager was so public,” he admitted to The Mayo News.

“Their names were out on social media and their proposed backroom teams, it was very public. The good thing that came out of it was that four really good, really passionate, Mayo people went for the job, and I think any one of them, would have done a really good job.

“I’m delighted to see Stephen Rochford back in again with Kevin (McStay) and I think they will do a really good job. But the recruitment process was way too public,” he continued.

Moran, who turns 39 in November, also revealed that he would be hanging up his boots once Ballaghaderreen’s interest in the 2022 season had come to a close.

This will definitely be my last season as a player. We’ll finish out the season and I’ll concentrate fully on management then. I have had an unbelievably fortunate existence.

“I played for Mayo right up to my 36th birthday. Not many people get to do that.

“I played so many times for them, enjoyed every minute of it and got to play in Croke Park. Of course, we wanted the All-Ireland, but, unfortunately, we didn’t get it. But my time is done now,” he stated.