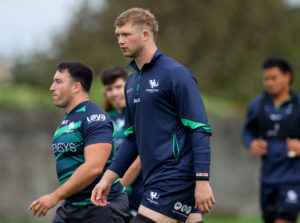 Denis Buckley and Niall Murray are on the bench for Connacht on Saturday (tomorrow) evening.

Roscommon duo, Niall Murray and Denis Buckley, are among the replacements for Connacht’s opening game in this season’s BKT UCR against Ulster at the Kingspan Stadium on Saturday evening at 7.35 p.m..

The team will be captained by Gavin Thornbury, who will make his 64th appearance for the province.

Peter Dooley, Josh Murphy and Byron Ralston have been handed their first Connacht caps, with Shamus Hurley-Langton and David Hawkshaw also potential debutants off the bench.

Kieran Marmion and Conor Fitzgerald are paired together at numbers 9 and 10 respectively.

“We’ve had a very positive pre-season and there’s now a huge sense of excitement among the group. There’s a genuine belief and optimism about what we can achieve in this first block of games, which all starts in Belfast tomorrow night.

“Ulster are a quality side and our battles against them are always hard fought. We’re really looking forward going head-to-head with them in what should be a great season opener for us both,” said Connacht Director of Rugby, Andy Friend.