Devaney digs Kilbride out of a hole 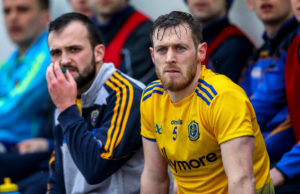 Kilbride were the big winners in this afternoon’s intermediate football championship action as their four-point victory against Clann na nGael saw Seamus O’Neill’s side reach the knockout stages and, in the process, condemn last year’s beaten semi-finalists to the relegation play-offs.

A seven-point contribution from former Roscommon player Conor Devaney was the decisive factor in chiselling out a 0-16 to 0-12 victory at Dr. Hyde Park.

Sea Henry and Ross Naughton were to the fore in the scoring stakes for Clann, but they still trailed by three points at the break.

With vital contributions by Seán Hanly and Alan Merriman, alongside Devaney’s tour-de-force, Kilbride were always able to keep Clann at arm’s length to seal a famous win.

Éire Óg ensured they topped Section C as, even without Conor Cox, they were too strong for neighbours Castlerea St. Kevin’s at Ballinlough.

In Cox’s absence, Liam Creaton stepped up to the plate, kicking nine points in a deserved 0-14 to 0-7 victory.

In Section A, St. Croan’s were the day’s big winners as they defeated Kilmore by 2-12 to 0-9 to edge out Creggs on scoring difference and take second place in the group.

The game was marred by an injury to Shane Crowe on the stroke of half time, which necessitated an ambulance to take the Kilmore forward to hospital.

At that stage, Kilmore were 0-4 to 0-3 ahead but they never raised a gallop in the second half as Dan Malone went on the rampage for St. Croan’s. The full-forward ended up with a personal tally of 2-4, while Gerard Connaughton, Keith Muldoon and Richie Thompson also chipped in with big performances.

Fuerty topped the group with a surprisingly easy 4-10 to 0-12 victory against neighbours Creggs at Dr. Hyde Park.

A close-range goal from Aengus Lyons kickstarted an unanswered 2-2 from the winners. Ronan Dowd and Noel Gately tried to get Creggs back into the contest, but they still trailed by 2-4 to 0-6 at half time.

Two more goals in the second half from Lyons and substitute Darragh Mullen confirmed Fuerty as one of the teams to beat in this year’s championship.

In Group B, St. Brigid’s survived a late scare in Croghan to prevail against Shannon Gaels on a scoreline of 1-11 to 0-12.

Tom O’Carroll’s first-half goal was the catalyst for a 1-5 to 0-7 interval advantage for the visitors. Five points inside the opening ten minutes of the second half propelled Brigid’s five points clear but a late rally by Shannon Gaels almost salvaged a draw as Shane Beirne’s palmed effort in injury time cleared the crossbar when many in the ground thought that he had scored an equalising goal.

Last year’s beaten finalists, St. Dominic’s, underlined their class with a routine 2-19 to 1-8 dismissal of St. Aidan’s in Knockcroghery.

Keith Doyle (0-6) and Daire Keenan (0-5) were hugely influential for the winners, pitching in with a litany of delightful points from play.

The home side were 0-11 to 0-5 ahead at the break, and two second-half goals from Tommy Hurley killed off the tie.

*Reports from all six of this afternoon’s intermediate football championship games in Tuesday’s Roscommon Herald.