It was a weekend of tense finishes, returning emigrants and serious declarations of intent in the Roscommon senior football championship, with Boyle and Roscommon Gaels marking themselves out as sides that are coming into form at just the right time.

While all this is going on, Roscommon still haven’t got a senior manager in place, but here in the Roscommon Herald, we’re happy to do the donkey work and highlight 15 players who put their best foot forward in their club’s cause! That’s right, it’s Team of the Week time…

Toss of a coin here between Martin and Niall Curley of Strokestown, but while Curley made some excellent saves, Martin was under much more pressure than he might have expected in this fixture, and his well-placed restarts were crucial to his club holding a fair share of possession against opposition that was highly motivated to try and snatch a place in the knockout stages. 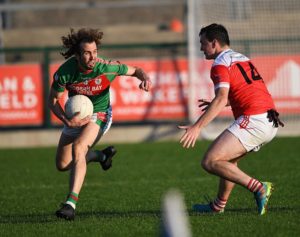 Darragh Sheehy was crucial to St. Brigid’s taking a narrow victory out of Tulsk.

The first two names on the team sheet are both from the Kiltoom club, with Sheehy getting the nod because of the importance of his assignment (marking Thomas O’Rourke) and the quality of his all round play, on and off the ball.

If we’re to be completely honest, there weren’t too many star performances in full back-line roles over the weekend, and while Kilcline went well for most of the Gaels’ contest with Michael Glaveys, Andy Glennon caused some problems for the team too. However Kilcline offers a great mix of mobility and power, and when Glennon dropped into deeper positions to pick up possession, Kilcline was able to follow him out and even become involved in the attack, chipping in with two points.

It would be no surprise to see Daniel follow in the footsteps of his uncle David and play a host of different roles on the field for club and county in the coming years, but he certainly discharged his duties as a specialist corner back very well on Saturday evening. He never lost concentration and was on his toes every time the ball came into his vicinity, and has been a huge addition to Cian Smith’s senior panel, freeing up Killian Cox to operate further outfield.

Out of the starting six forwards for Pearses in Strokestown last Saturday, Paul Carey scored five points and the other five players scored 0-1 (a Hubert Darcy mark) between them. Pat Flanagan will be hugely grateful that he had Ronan and Conor Daly chipping in with strong contributions from outfield.

We are swapping wings here as Ronan – like our upcoming choice for the number 7 shirt – operated on the left flank, but he absolutely had to be included after a trademark display. If we had to go for a player that started on the right wing, then Pádraig Scott of Tulsk would have been selected.

Michael Glaveys endured a dreadfully difficult outing in Creggs on Saturday but their difficulties can largely be attributed to their lack of depth, relative to their opponents. Their natural leaders still stepped up, and no-one was more brave, committed or wholehearted than Shane O’Malley at six.

Two points, strong on the ball, and most important of all, East ensured that Emmet Kenny was nowhere near as influential as usual for Clann na nGael on Saturday. So much of Clann’s attacking play features Kenny linking up midfield and attack, and East had him on the back foot for most of the game.

All across the board, there were some excellent displays at number seven this week. Paul Kenny, Brian O’Hara Duggan and Cathal Duignan were also in fine form, though not at the same level as East and Ronan Daly. 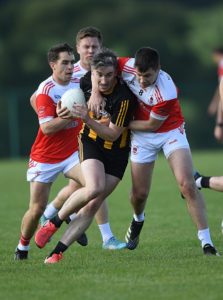 After week one, we selected Conor Daly in this berth, and listed that Roch Hanmore of Boyle was unlucky to miss out. The same applies on both fronts this week, albeit it was a close call on that occasion, while this time around Daly’s display was so dominant as to make the decision a very simple one. Pearses aren’t quite where they need to be right now as a collective unit, but their midfield star is certainly doing all he can for the cause.

Not for the first time, the Ballyleague club were heavily dependent on the energy and the all-round footballing ability of their tireless midfielder. Three superb scores capped yet another excellent performance from a man who is included in Team of the Week selections more often than not.

Yet again, we’re taking positional liberties here as Walsh was centre forward for Oran in their 2-15 to 2-7 win over Elphin, but six points, four from play, was hard to ignore from a player that is just back from the US. His return is a huge boost to an Oran side that is winning games, though possibly not quite as stylishly as some of their fellow championship contenders.

If you wanted to pick holes in some of Connolly’s play on Saturday in Creggs, you easily could. He drifted in and out of the contest, he struggled with some of the graft that’s needed in the diamond sector, and for every precise pass into the inside forwards, there were plenty more “turn back and recycle” plays to balance it out.

However the sheer magic he’s able to introduce to a game is irreplaceable. Other players could execute simpler things that bit quicker and more efficiently, but they simply don’t pose the scoring threat of the mercurial Gaels man, who chipped in with two sublime goals.

He played at corner forward, but came out the field to get himself more involved in the game and could easily line out in a role like this. His work off the ball is impeccable, and like Walsh, his return to the Oran team is a game-changer. 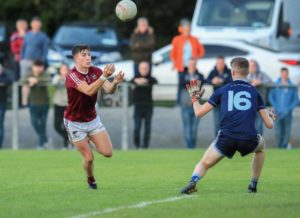 Boyle’s Daire Cregg was in sensational form on Saturday.

First name on the teamsheet after a truly devastating performance that yielded 3-4. He’s the form forward in the county right now, and it’s hard to imagine any full back line handling the threat that he and his colleagues pose.

After scoring 1-15 in his most recent championship outing against Clann na nGael three years ago, it’s hard to get too excited about 1-4 here – but in one sense, that just shows how high the bar has been raised. Arguably his best moment of the game wasn’t any of those five scores, but the inch-perfect diagonal ball he played into Daire Cregg to set up a crucial green flag in the third quarter.

A shout out here to Bobby Nugent, who put in a very good showing as the main threat in the St. Brigid’s forward line against Tulsk.

Unlike Cregg, who was central to everything Boyle did, Gillooly’s game was a lot simpler. Get the ball, and score. Will it be enough to force his way into a Roscommon county team next year, perhaps not – but at club level, there is immense value to clinically executing that simple skill over and over again.