Fuerty and St. Dominic’s moved well clear of the chasing pack while Éire Óg also made light of the absence of star forward Conor Cox as they brushed aside Castlerea in a local derby clash to decide top spot in section C of the Callington Ltd IFC.

Elsewhere, results in the group games and Sunday evening’s draw threw up what’s sure to be a hugely competitive relegation dogfight between Kilmore and Shannon Gaels next weekend, with Clann na nGael now just 60 minutes away from dropping back down to junior after yet another anaemic performance from last year’s semi-finalists.

But this isn’t about what teams did what, this is about individual glory, and getting your place on the Roscommon Herald IFC Team of the Week!

After soldiering outfield for many years, Mike Holland has dropped back between the posts for this 2022 championship and quickly developed an excellent rapport with his kickout targets, albeit he is very well served in that department with Richard Thompson, Keith Muldoon and several others all well-able to hold their own under a high ball.

Still, having a solid goalkeeper who can orchestrate the defence and is reliable under pressure has taken a lot of pressure off outfield.

No Tom Bannon for Fuerty this week, but Whyte effortlessly switched across to the full back role and did very well on one of the best forwards in the intermediate championship, Ronan Dowd.

Whyte has a proper corner-back’s instinct, where he stays sharp, finds a way to get a hand in and slow things down, and is quick to pounce when the turnover is there to be won. 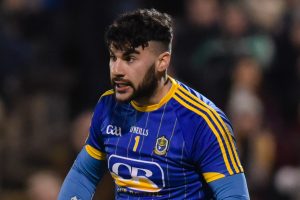 Having lined out at midfield in earlier games, Éire Óg took advantage of the relatively low stakes in their clash with Castlerea to try something new and deploy the county goalkeeper on the edge of the square, and it’s an experiment that’s likely to continue into the knockout stages. Against a dangerous full forward line, Lavin and his colleagues had a very solid outing, and they never looked like giving St. Kevin’s the goal chances they needed.

Dockery is more usually used in the half-back line but Tomás Gilleran asked him to switch back to take on the challenge of marking Eoin Fallon for this contest, and while Fallon had his good moments, Dockery certainly emerged with credit from the game too.

Physically, he’s powerful and fit enough to compete with anyone, if he’s dragged outfield he can certainly contribute – as evidenced by an excellent first half point – and he’s well able to play his part in the team’s high-tempo counterattacking style.

Taking frees is a nice head start for any defender to catch the eye, but Ward offers so much more than that. He gets involved at both ends of the field and his quick use of the ball is vital when it comes to Fuerty’s excellent transition play.

Connaughton’s return to action after missing the latter stages of last year’s championship has completely transformed St. Croan’s prospects of bouncing back up to senior level at the first attempt. John Gannon was central to Kilmore on Sunday afternoon, moving around the field in a bid to unsettle the St. Croan’s back line but Connaughton ensured that they kept their shape and were impregnable down the central channels.

Two sublime first half points from Conlon helped to get Shannon Gaels into a game where their forward line really wasn’t functioning well, as evidenced by the fact that by the end, the starting six forwards had scored just 0-2 from play between them.

Alongside Jamesie Greene, Crawley makes up part of a real “twin towers” midfield pairing that is capable of completely dominating their crucial sector of the field. Against Castlerea, Éire Óg starved a talented forward line of good possession, and ensured that most of the play was at the other end of the field, where Liam Creaton ran riot. There’s a very simple style to Éire Óg’s football but it works, and Crawley is central to it.

Out of the six intermediate games, all featured this week’s Roscommon Herald, three Player of the Match awards went to centre forwards and three went to full forwards – so a little positional juggling is required to make things work.

Our main switch is dropping Keith Doyle back to midfield, even though it was from centre forward that he dominated proceedings in Knockcroghery. His athletic ability is never in doubt, but Doyle seems to have evolved from a player that can take a score when the opportunity arises, to a consistent threat in front of the posts. It’s impossible to argue with 0-6 from play anyway. 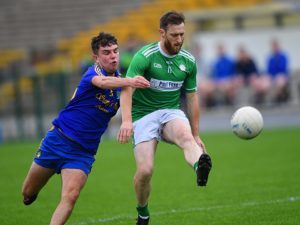 Conor Devaney was Kilbride’s playmaker and the clear star of the show on Sunday in the Hyde.

Another repurposed centre forward for the purposes of this team, Devaney also couldn’t be left out. There’s no getting away from it, Kilbride’s clash with Clann at the Hyde was relatively uninspiring, but the game was lit up by the former county star who linked up defence and attack, and scored a hefty 0-7 – five from play. Without him, they are a shadow of themselves.

Lyons played the game a little differently to the other two 11s on this team, but Fuerty prevailed because of their goal threat, and the dual star was the man around which their fast running game was based. He put his name on two goals of his own but was central to plenty more chances, as every time he took possession he was looking to go for the kill.

A tireless performance was rewarded with two late goals, including one stunning top corner finish from nearly 20 metres out, but it was his graft and relentlessness over the first 45 minutes that earned his place on this team, as opposed to the closing stages when the Dom’s spilled through a depleted and tired St. Aidan’s side.

Hurley showed for the ball, he made decoy runs, he made support runs, and he simply emptied the tank in the team’s cause throughout. Getting back to the Hyde for bigger games to come will suit him even more.

There might be some outcry around Loughglynn as Keenan edges out Liam Creaton for this spot, which is more than a little harsh on Creaton, who couldn’t have done any more for his team’s cause. Yet there is a wonderful touch of class to Keenan’s play, an ability to create a scoring chance out of what might look to a lot of other players like heavy traffic and a dead end.

Everything Malone did had a touch of class about it. As the focal point of the St. Croan’s attack, he helped himself to a tally of 2-4 but was still bringing others into the game around him, when it was the right thing to do. He frequently found himself in one-on-one situations and made hay, though that says as much about Kilmore’s naivety as it does about the shrewdness of the St. Croan’s movement. 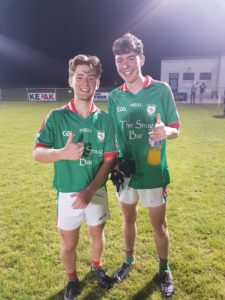 Tom O’Carroll (left) was in superb form for St. Brigid’s in Croghan.

Not unlike his younger brother, what O’Carroll lacks in height is balanced out by his incredible footballing intelligence. He doesn’t shy away from the war in the trenches and still manages to throw himself into piles of bodies and yet come up with the ball. In a game that finished 1-11 to 0-12, it goes without saying that his contribution of 1-2 was vital to St. Brigid’s victory.

Filed under: Roscommon GAA, Roscommon IFC, Team of the week