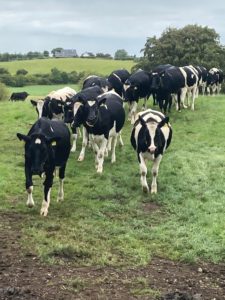 A Roscommon farmer who had 7 in-calf Friesian heifers stolen last month has renewed his appeal for information.

Dairy farmer Enda Doran said he remained hopeful the animals could be found and asked people to continue to share his post online about the stolen animals, to ensure that the stock was “too hot” to be moved or sold .

“We are still hoping they are still alive,” he said. “They are not stock for every farmer, this is what I can’t understand and why I think they were stolen to order. But we just don’t know. I would hate to think that they’d been slaughtered, that’d be sickening.”

The Garda investigation into the theft of the seven cattle from lands at Earlspark, Ballinasloe, County Roscommon is continuing.  The cattle disappeared overnight on August 19th to August 20th 2022. No arrests have been made to date, enquiries are ongoing. Anyone with information is asked to contact Roscommon Garda Station (090) 663 8300.

Mr Doran said that the thieves knew about the cattle as the land is well off the main thoroughfare, the old Dublin road.

“The land is down a boreen off the main road. You wouldn’t see it unless you knew it was there. You wouldn’t know it was there. There is one way in and one way out. You are three miles from Ballinasloe town and a mile from the motorway but how did these people know the cattle were there? There had to be some sort of local knowledge.”

He believed that the theft occurred in daylight in the early hours of the morning, and that a jeep and trailer were used.

“We found tracks that morning, at half seven. They had backed up to the gate. They hadn’t actually gone into the field,” he said, adding that the cattle, reared from calves, were very used to being handled. “You’d load them very handy.”

While the seven were randomly picked out of 25 in-calf heifers in the field, four of the cows were of a high genetic value.

“They would have been calving next January-February time,” he said. He said that the Gardaí were in regular contact with him and were looking at CCTV footage from all directions.

“The cattle were all wearing heat detection collars, so that’s another loss. They’re not traceable. The last four digits of their tags are freeze branded on to them, and they can’t be changed.  Tags can be changed but not freeze brands.”

A full time farmer, Mr Doran said it was a significant loss, agreeing he needed the theft like a “hole in the head”.

“We have only been in the dairy sector since 2016,” he said. “Personally myself I am losing a bit of hope at this stage. But you never know.”

The IFA is also working on the case, and urged farmers to remain vigilant. “Any butcher or agri-person would have known they were in-calf,” a spokesperson said. “And if they did know, that’s completely shocking.” 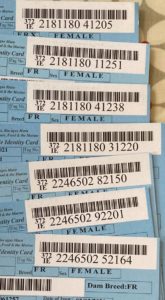