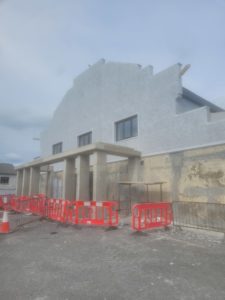 Works are continuing to prepare the county’s new temporary courthouse.

External and internal refurbishments are ongoing at the former Fairyland dancehall on the Racecourse Road in advance of November’s circuit court sessions. Columns have been installed at the front of the building as part of the works.

Jury trials at the county resumed in June of this year following a two year absence due to the pandemic.

A spokesperson for the Courts Service said that works were currently well underway on the new temporary courthouse in Roscommon.

“It is intended that the venue will be operational from November 2022,” he said.

During the summer sessions of the circuit court, Judge Francis Comerford highlighted that the new temporary court building in the county town should be ready for use for the November sessions. However, there was only one courtroom in the new building, meaning “if the district court is on, the circuit (court) will be homeless” he said.