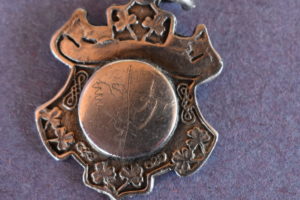 The front of the provincial medal won by the Roscommon minor hurlers in 1967.

A Connacht minor championship-winning hurling medal from 55 years ago, which was discovered on a bog in the Galway Gaeltacht, is on the lookout for its Roscommon owner.

Former All-Ireland footballer winner with Galway in 1976, Pádraic Ó Conaire, was working on the bog in the Inverin area of Connemara in the summer of 2020 when he discovered a box. He subsequently opened it and unveiled the medal, which had a faint Connacht GAA crest and hallmark from 1967.

Pádraic, who is the current Games Manager of Clár na gCluichí Gaelacha — a GAA-funded coaching scheme for the Connemara and Mayo Gaeltacht — handed over the medal to his neighbour Mártan Ó Ciardha — a retired sports editor with Raidió na Gaeltachta — who has been working on reuniting the medal with his owner.

“I subsequently did some research and found out that Roscommon won the Connacht minor hurling championship in 1967. Galway teams competed in Munster between 1959 and 1969.

“Roscommon beat Mayo in the Connacht semi-final and Leitrim in the final. They were well beaten by Down in the All-Ireland semi-final,” Mártan, who now writes a weekly column on the online Irish Language news service, www.tuairisc.ie, told the Roscommon Herald.

“Obviously, it would be great if we could reunite the medal with its owner. Connacht-championship winning medals are precious and I’m sure whatever player from Roscommon owned it would love to get it back,” he concluded. 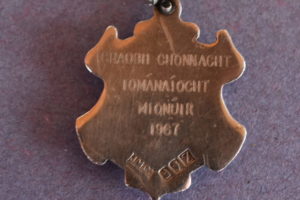