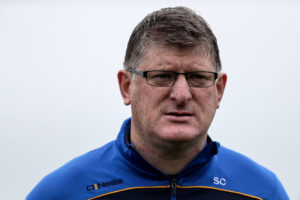 Shane Curran will be staying with Caulry for 2023.

Former Roscommon goalkeeper, Shane Curran, has committed to Caulry for another season.

The Westmeath club’s executive confirmed that the former county U-20 football manager and St. Brigid’s All-Ireland club winner had been ratified as senior team manager for the 2023 season.

“We hope the lads can build on the progress made over the last two seasons under his (Curran’s) guidance. We wish Shane and his management team the best of luck,” the club said.

Last week, Curran suggested that Roscommon would struggle to put a capable backroom team in place, even if they found a manager to replace Anthony Cunningham.

“Managers are, in some cases, only one part of the jigsaw. Those that do in some cases don’t have that knowledge and experience and they are shoehorned into positions where their past playing career counts for something and they are proven unsuitable for the role,” he told The Sun.

“But to be able to put in suitable personnel with experience to support a manager — particularly for an outside manager coming into Roscommon or any set-up — they need internal support with people that are suitably qualified.

“There’s probably a lack of suitably qualified people with the knowledge and experience to take on these roles. Unfortunately, a lot of counties don’t have that level of personnel.

“That being said, the club championships are still ongoing and if they can get the right person, great.

“But what probably will happen is there will be a happy medium found with someone and people will probably be put around that person who may not have the necessary experience or knowledge.

“That’s the biggest problem that I see for counties like ourselves that don’t have the funding capacity or the resources, either financially or experience-wise and knowledge-wise to support a manager that comes from the outside,” he explained.

Meanwhile, it remains unclear if Roscommon will be in a position to ratify a new senior manager at next Monday evening’s county board meeting. Current Pádraig Pearses manager Pat Flanagan remains the firm favourite to succeed Anthony Cunningham, having been nominated by the reigning county and Connacht club champions.