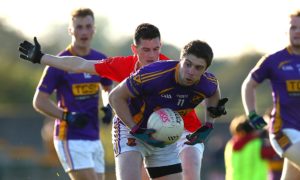 Roscommon Gaels have dumped reigning county and provincial champions, Pádraig Pearses, out of the race for this year’s Fahey Cup after a superb second-half performance procured a 1-11 to 1-6 victory at Dr. Hyde Park this evening.

Pearses, despite playing against the wind, started like an express train, and Jack Tumulty’s scrappy early goal saw them race five points clear.

The Gaels rallied with five points in succession, including three outstanding efforts from Kieran Kilcline, and by the midway mark Frankie Dolan’s men only trailed by a point, 1-3 to 0-5.

Cian Connolly’s goal 25 seconds into the second half changed the dynamic of the contest. The Gaels duly kicked on and points from Mark Purcell, Peter Gillooly and Scott Oates put some clear daylight between the sides.

When James Fetherston denied Paul Carey during the game’s dying embers, Gaels had dethroned the champions and, in the process, blew this year’s title race wide open.

In the earlier game in the Hyde, St. Brigid’s claimed the bragging rights against southern rivals Clann na nGael with a deserved 2-12 to 1-12 triumph.

With the wind behind them, Brigid’s made a blistering start and Ben O’Carroll’s early goal settled Jerome Stack’s side.

But Clann eased their ways into proceedings and had pared back the deficit to 1-3 to 0-4 approaching the break. But three scores on the bounce from Brigid’s — the highlight being a superb effort from Bobby Nugent — gave the 2020 champions some breathing space as they led by 1-6 to 0-4 at the break.

When O’Carroll converted a penalty in the early stages of the second half, Brigid’s tagged on further scores and were nine points to the good at one stage. Clann did mount a comeback, ignited by a wonderful Conor Farrell goal, but they had left themselves with too much to do.

In this evening’s relegation play-off at Strokestown, Tulsk relegated neighbours Elphin to the intermediate football championship with a hard-earned 0-13 to 1-7 victory.

Four points from Thomas O’Rourke left Tulsk 0-8 to 0-2 ahead at the break but when Aidan Murray fisted a second-half goal for Elphin, the 2019 intermediate champions were left to survive some anxious moments. But they just about crossed the finishing line, with Tadhg and Thomas O’Rourke, and Evan Flynn to the fore.

The first two quarter-finals in the intermediate football championship proved to be one-sided affairs.

Fuerty had too much firepower for Castlerea St. Kevin’s, prevailing by 3-13 to 1-8 in Rockfield.

Aengus Lyons and Adam McDermott exchanged first-half goals, leaving Fuerty 1-7 to 1-3 in front at the break.

A second yellow card for Hugh Rooney left Castlerea with a mountain to climb, and Fuerty duly took advantage with goals from Mark Ward, from the penalty spot, and lively substitute Tadhg Lyons easing James Bannon’s charges into the last four.

Gerard Connaughton and Dan Malone grabbed first-half goals to leave Malachy Gately’s side cruising at the break, as they surged 2-8 to 0-3 clear.

Substitute Damien Goggins added a third goal in the 55th minute, while Aidan’s were reduced to 14 players in the final ten minutes when Cathal Kelly was dismissed.

In the Junior A Football Championship, Ballinameen became the first team to reach the semi-finals with a 0-13 to 0-9 victory against St. Dominic’s in Strokestown this afternoon.

The winners trailed by two points, 0-6 to 0-4, at half time, having played into the teeth of a strong breeze. They duly made the elements in their favour count after the break, with Gary Hanly, Peter Keane, Conor Durkin and Liam Kelly showing up well for Derek Connellan’s side.

In this evening’s game, Strokestown caused a surprise by edging out Kilglass Gaels by 1-9 to 1-8 in Tarmonbarry. A late goal by Robert Regan alongside a point by Cian Corcoran in the fifth minute of injury time swung the pendulum in the Black and Amber’s favour

*For match reports on all these games, check out Tuesday’s Roscommon Herald.