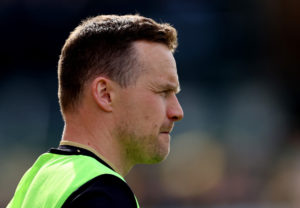 A hat-trick of goals to help his club preserve their senior status — it wasn’t a bad way for Andy Moran to bow out of club football.

The Leitrim manager was on duty for his club, Ballaghaderreen, for the final time this evening, and he played a major role to ensure that Ballagh will be playing senior championship football in 2023.

The former Mayo player bagged 3-3 during his side’s 6-8 to 2-8 victory against Davitts in this evening’s relegation play-off at Claremorris.

At the end of the game, Moran received a Guard of Honour as the curtain came down on a wonderful career, that included two Mayo senior titles with Ballaghaderreen in 2008 and 2012.

In a tweet this evening, Ballaghaderreen GAA Club quipped that Moran’s performance “wasn’t a bad way to say goodbye”, describing him as a “true legend.”