The Murray Cup is in Knockcroghery again – but who makes the IFC Team of the Year?

It wasn’t the convincing victory that their form from earlier in the year hinted at, but St. Dominic’s won’t care about that as they bask in the glory of bringing the Jamesie Murray Cup back home to Knockcroghery, the home of the Roscommon GAA Legend after whom the Intermediate Championship trophy has been named.

The Connacht championship lies in wait for Tomás Gilleran and his troops, while the other 11 clubs that competed at this level can now only reflect on their season, and either look to build on some really promising performances – most notably Éire Óg and St. Brigid’s – or else regroup and transform, which will be on the agenda in clubs like Kilmore and Shannon Gaels.

But now for the big question – who earned their place on the Roscommon Herald IFC Team of the Year? There are slots there for players from six different clubs, with the finalists taking up nine in total.

Not a lot to call between Miley and Joe Fallon, with the Fuerty man also having an impressive season, but a couple of really big saves from Miley at various stages in this championship, particularly early in a quarter-final clash with Creggs that could have got very sticky if the Galway-border club got an early goal on the board, means he gets the vote by a narrow margin.

Last year, St. Dominic’s were all about shock and awe – trying to blow teams out of the water with fast-paced attacking football. They tempered that in 2022, looking after their defensive business first and carefully picking their way through games. That required building around a solid structure at the back, and Micheál Byrne was at the heart of that. He spent some time in the half-back line, but his best work was in the corner, particularly in their semi and quarter-final wins. 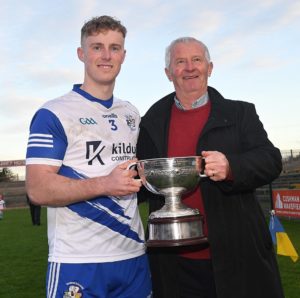 The man himself would probably prefer to play at number six, but the decision to move him back closer to his own goal was spectacularly vindicated in the final, when he took on the huge challenge of marking Conor Cox and did so very well, getting the better of the main Éire Óg attacking threat. It will be a huge surprise if he isn’t a mainstay on the Roscommon county side in 2023.

As soon as the Kiltoom club were knocked out of the intermediate championship, senior manager Jerome Stack was happy to parachute Daly right into the senior team, starting him in the semi-final against Boyle. It was the obvious call as Daly had been in immaculate form for Enda Nugent’s intermediates, peaking in the quarter-final when he put in a superb marking job on Conor Cox.

Both Fuerty wing backs – Philip Neilan and Mark Ward – had an excellent year, but while Neilan narrowly misses out despite his heroic effort in the semi-final, Ward’s consistency the whole way through the season earns him inclusion. To offer such a consistent scoring threat while still covering the defensive side of things speaks volumes about what he brings to the table.

Physically, and in his style of play, Lohan has transformed from being a promising young player into becoming a mainstay on his club team, anchoring a key position on the field extremely well. He has the pace and the footwork to counteract players running through from deep, he’s strong in competing for ball and he looks after possession very well, moving the play quickly and making life easier for others around him.

The return of Ger Connaughton and Ross Timothy to the St. Croan’s side this year was a huge part of why the club was so competitive, reaching a semi-final after coming through a very tough group. Connaughton is a defender first and foremost but he can play ball with the best of them too, and also was a big part of the club’s varied kickout strategy this year. We will give a shout here too to Darren Conlon, who put in some very strong showings for Shannon Gaels. 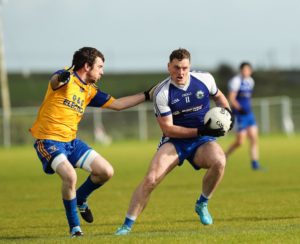 You build teams around players like Thompson – guys who empty the tank every time they go out, who relish the hard work that goes with playing a box to box role in the middle third, but also who can light up a game with moments of quality if the chance arises.

Keith Doyle might feel a little bit hard done by not to be included here, but while he was imperious against St. Aidan’s in the group stages and good in patches throughout the knockout series, he wasn’t nearly as consistent as the St. Croan’s man.

If we were to go on Sunday’s final alone, then it could be argued that Crawley wasn’t even the best midfielder in his club – but over the course of the season, there could be no mistaking who was the leading light in this sector. Crawley is a throwback to midfielders of 20 years ago – extremely powerful, imperious in the air, and with a good boot on him, able to stride forward and take a score if needs be. If he can add a fraction more agility and flexibility, he could easily be an impact player at the next level. 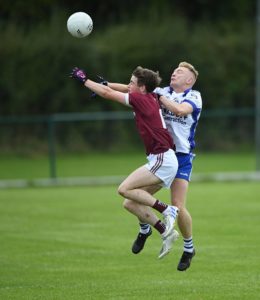 Cian Kelly made a pretty powerful case for inclusion last Sunday and if he had been started all year long, perhaps he would have had to get the nod. Mark Dowd however was a regular for Creggs, in a pivotal position in the half-forward line, and he never let his team down, always competing well and adding sharpness and craft to the team’s attacking play. His form made it a lot easier for management to push Shane Dowd back into midfield, which is an area where the club needed that bit of help and quality.

Lyons got his name on a lot of vital goals for Fuerty this year, and thrived in the much more fluid, high-tempo style of play that was employed in the club for this year’s campaign. With promotion to the O’Rourke Cup secured and St. Dominic’s out of the way, they’ll start 2023 as favourites for the Intermediate championship, and Lyons – and his brothers – will be at the heart of that.

McGreal lined out in a lot of different positions this year, from corner back all the way up to wing forward, but in a team like this, 12 would be the spot for him. His linking of the play is very good, he puts himself in the right position to make tackles, and his intelligence on the ball is like that of a player with a decade of senior experience. Would we pick a real team with three somewhat small half-forwards like this? That’s another question, but for the purposes of this exercise, McGreal has earned his spot.

Given St. Dominic’s history in county finals, and indeed Donnelly’s own ill-luck in 2021 when an ill-timed bout of Covid meant he missed the decider, he could easily have panicked in the aftermath of his black card last Sunday. Instead he performed an excellent mental reset and came back on the field to play a crucial role for his team. It crowned an excellent year for Donnelly, where like the rest of the team, he needed to transform his style. Prior to 2022, he was almost exclusively a poacher, but now he offers so much more.

In what was an extremely competitive battle for the number 14 shirt, Jack McDonnell (St. Brigid’s), Paul Garvey (Kilmore) and Dan Malone (St. Croan’s) all played to a very high standard, and any of those three would have been justifiable selections.

Nonetheless it’s still impossible to look past Cox, who led from the front for Éire Óg and aside from the quarter-final against St. Brigid’s where he never settled into the game, was a key man every time he togged out. As a pure scorer, there are very few on his level in the county, senior or intermediate. 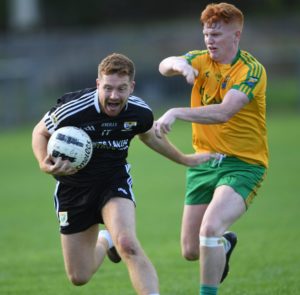 From the group stages and through to the knockouts, Creaton was performing so well that the question of whether or not he was due for a county call up was being asked quite loudly. Unfortunately for him, the fact that he had has worst day of the year in the county final means that probably won’t happen, but over the season as a whole, he earned his slot on this team. His partnership with Cox was a key factor in Éire Óg progressing as far as they did in 2022.

Filed under: Roscommon GAA, Roscommon IFC, Team of the Year