Pearses prevail at the second attempt 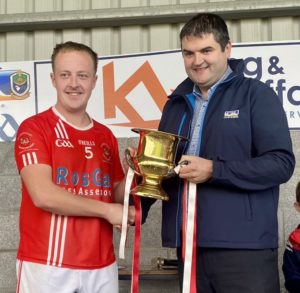 Pádraig Pearses added the Junior A county title to the U-20 success they enjoyed earlier this Autumn when a solid defensive effort held off St. Ronan’s in a tense county final replay this afternoon in Strokestown.

A huge crowd travelled to the home of the Fahey Cup holders this afternoon, no doubt hoping for a repeat of the fireworks that these teams produced in the Hyde last weekend.

Pearses certainly brought that form into the early stages of this replay as a string of points from Adam McGreal, James Ryan, Seán Fahy and Daniel Glynn helped them into an 0-7 to 0-2 lead. A wonderful team move from St. Ronan’s in reply left Ronan Kelly with a clean shot on goal and the wing forward made no mistake, blasting a perfect low drive past Jamie Donoghue to reduce the gap.

Gary O’Daly and Thomas McManus followed up with points either side of a good score from Shane Mulvey to leave the bare minimum in it at half time, 0-8 to 1-4.

However the second half lacked the same free-scoring quality, and while St. Ronan’s drew level at 0-9 to 1-6 after 37 minutes, their shot selection and their inability to penetrate the Pearses defence meant that they didn’t score for the remainder of the game.

Pearses struggled in front of the posts too, with Daniel Glynn kicking the last two scores – one after 45 minutes and then a good free from distance at the start of stoppage time, but they controlled possession well and never looked like giving St. Ronan’s the chance to get back on level terms.

Pearses will now play intermediate championship football in 2023, as well as competing in Division Two (O’Gara Cup) in the league, while St. Ronan’s season is not over. They play Owenmore Gaels of Sligo in the Connacht Junior club championship next Saturday afternoon at 1 p.m. in Dr. Hyde Park.

For a full report, analysis and reaction from this final, be sure to pick up next Tuesday’s Roscommon Herald.