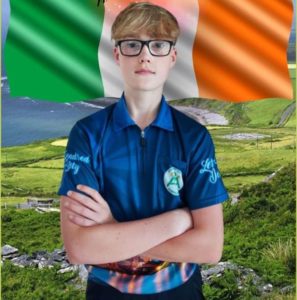 James Morris from Kiltoom who will be representing Ireland at the JDC World Darts Championship in Gibraltar.

A young darts player from County Roscommon will take on some of the best players in the world later this month when he represents Ireland at the JDC World Darts Championship in Gibraltar.

Fifteen-year-old James Morris from Kiltoom will take part in the Singles tournament at the prestigious event, which gets underway on November 21st.

It will a proud moment for James, a member of Athlone Darts, and his family when he represents his country for the first time.

“We always had a darts board in the house, but it was only when James was around 10 or 11 years of age that he started to follow the darts on the television. He loves Peter Wright.

“James joined Athlone Darts where his coach is Seamie Tynan. He has been part of the Westmeath Youth darts team and has played in lots of different tournaments. Two other players from the club, David Flynn and Aaron Killane, are also going to Gibraltar as part of the Irish team,” James’ mother Sinead told the Roscommon Herald.

It will be very much a family affair for Sinead and her husband Seán as their youngest son, John (13), will also be heading to Gibraltar to take part in the Michal van Gerwen Masters and Gibraltar Open.

“There’s a history of darts in the family. My parents Tom and Carmel Smyth from Newtowncashel in Longford played darts with Howth Inn when they lived in Dublin,” continued Sinead.

Ahead of the trip, there will be a function in St. Brigid’s GAA clubhouse on Saturday (tomorrow) evening at 9 p.m. where James will be joined by his brother John to throw a few legs against local players.

James also plays Gaelic football with St. Brigid’s where he was part of the club’s U-15 team that claimed league honours earlier this year.