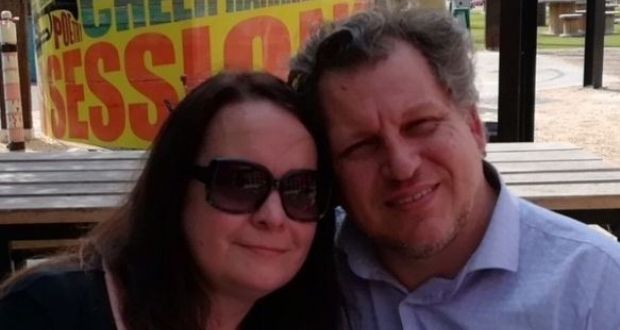 Robert Pether with his wife, Desree, who lives in Elphin with their children.

The wife of an Elphin resident who has spent the last 19 months in an Iraqi jail is to a stage sit-down protest tomorrow outside the Australian Embassy in Dublin.

Mr Robert Pether, an Australian citizen and engineer, who lives in Elphin with his family, was detained in April last year and sentenced to five years imprisonment in Iraq and issued with a fine of $12m. The company Mr Pether was working for had a contract dispute with the Central Bank of Iraq, whose headquarters they were rebuilding.

On April 1st, 2021,Mr Pether and his colleague, Egyptian-born colleague, Khalid Radwan, returned to Baghdad to try to assist in ending the dispute. The United Nations declared both their detention illegal and called for his and his colleague’s immediate release.

Tomorrow morning (Friday) from 11 am, his wife Desree Pether, who lives in Elphin with their three children, and a group of supporters will stage a sit-down demonstration with placards outside the Australian Embassy in Dublin.

“This will be about raising awareness of his case. In this particular instance I am asking the Australian Prime Minister Anthony Albanese to step up and do more,” she said.

Ms Pether said she has tried to get in touch with the Prime Minister and his predecessor many times since her husband’s detention – but without success.

Welcoming the fact that the new Prime Minister of Iraq had “a human rights record”, she said “that gives us a little bit of hope”. “I just need more representation and more action because this is basically an orchestrated life sentence with more and more cases brought against these two innocent men and we have to do more. What we have done so far isn’t working,” she said.

Her husband is currently sharing a 14 foot cell with 30 other men in Baghdad. “My husband is in poor health and he is struggling emotionally and physically. He has lost half his body weight and had a history of melanoma. It’s like watching him die slowly.”

Ms Pether and a group of supporters will be staging a similar demonstration outside the Iraqi embassy in London on Tuesday.

What has further added to fears for the future of her husband and his colleague is a recent development where the two men were presented with a new summons, and handed an additional $50m fine, Ms Pether said.

“This is an astonishing punch in the gut. It’s more fabrication and more manipulation of facts. It was a $20m case and they cancelled it after seven months and have now rounded it up to €50m about two weeks ago.”

Ms Pether said she just wants her husband home to be with her and their three children in Elphin as Christmas approaches.

(See full story in our next edition)