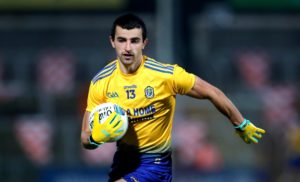 New Roscommon senior football manager Davy Burke has been boosted by the news that Ciarán Lennon intends to return to the intercounty fold.

The Clann na nGael forward wasn’t involved last season and spent the summer aboard alongside his brother Feargal.

However, the ace marksman has been taking part in trials in recent weeks in a bid to make the panel before the start of next season.

Lennon is one of a number of players putting himself up for selection before intercounty training resumes at the end of the month.