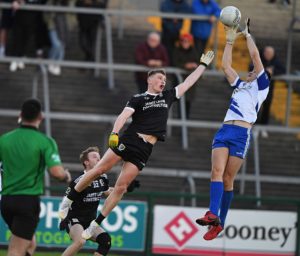 There was disappointment for players and supporters of St. Dominic’s and Aughnasheelin this afternoon when their Connacht club intermediate football championship semi-final was called off at the 11th hour in Cloone.

Players, officials and supporters from both clubs were inside the Leitrim venue when word filtered through that referee Christopher Ryan had deemed the pitch unplayable. The game was officially called off around ten minutes before the scheduled 1.30 p.m. throw-in.

Despite negotiations to try and move the game to the Connacht GAA Centre of Excellence in Bekan later this afternoon, a compromise couldn’t be reached.

It is now expected that the game will be played next weekend, which will mean that the winners will only have a week to prepare for the Connacht final against Dunmore MacHales. However, it remains unclear if the Leitrim champions will lose home advantage.

The game was originally scheduled for Avant Money Páirc Seán MacDiarmada, but the Carrick-on-Shannon venue was declared unplayable earlier this morning, and the match was subsequently moved to Cloone as Leitrim’s other county ground in Ballinamore is currently out of commission.