Strokestown crash out after titanic battle in Tuam 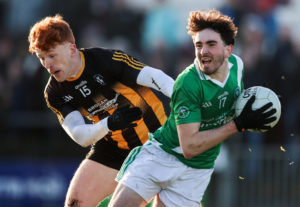 Strokestown put in arguably their best performance of the year against a highly-rated Moycullen side in Tuam Stadium this afternoon, but ultimately were undone by a combination of the Galway side’s superior firepower in extra-time, allied to a handful of controversial and consequential refereeing decisions from referee John Gilmartin.

A blistering start for the newly-crowned Roscommon champions saw them move 0-4 to no score in front after eight minutes, with Diarmuid McGann and Shane McGinley each popping over two points from dead balls. McGinley was incredibly lively as the lone full-time occupant of the full forward line while at midfield and half-back, Strokestown’s tackling and physicality really discommoded Don Connellan’s Galway title holders.

However the game changed completely when Gilmartin decreed that David Butler’s late arrival to a loose ball constituted a cynical trip, and the midfielder received a black card. By the time he returned the field, Moycullen were back on level terms, with momentum, after scores from Dessie Conneely and Owen Gallagher.

It appeared throughout the contest that frees came that little bit easier to Moycullen, and they led 0-6 to 0-5 at half-time, a score that remarkably was unchanged until the 27th minute of the second half.

Moycullen did miss a host of chances, with Peter Cooke coming off the bench to feature prominently, but also missing a total of six chances over the course of the contest. A hotly-disputed free say Conneely make it 0-7 to 0-5 with three minutes to play, but Cathal Compton came up trumps with two huge plays to force extra-time – first making a wonderful high catch to set up a score for Diarmuid McGann, then firing the ball over from the right wing in the fourth minute of stoppage time to leave it 0-7 to 0-7 at the end.

Paul Kelly punched a point to move Moycullen into the lead early in extra time but another huge call was to prove fatal to Strokestown’s chances, as a short kickout from Niall Curley to Timmy Gibbons forced the young corner-back to try and pick up the ball off the deck. Cooke seemed to push Gibbons in the back but no free was awarded, and instead Gibbons was whistled for handling the ball on the ground as he fell. A quick free from Cooke to Seán Kelly left the Galway county star clean through on goal, and while Niall Curley did brilliantly to save the first effort, the rebound fell back to Kelly, who picked out the bottom corner at the second attempt.

A red card for Keith Murphy at half-time in extra time left Strokestown with a mountain to climb and while they tried to test the Moycullen full back line with a few long, high deliveries into Cathal Compton, the defence held firm and Moycullen were able to break clear and clinch their win through a late Ger Davoren tap in goal.

For a full report and reaction from this game, check out Tuesday’s Roscommon Herald.