Local drama group delighted to be treading the boards again 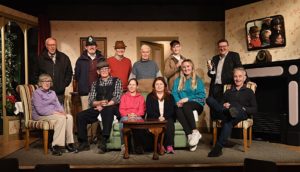 The cast and crew of the Kiltoom Drama Group

The Kiltoom Drama Group is delighted to be treading the boards again this week. After a two year pause due to the pandemic, the South Roscommon group will be performing the hilarious play ‘Brush with a Body’ by Maurice McLoughlin from Thursday, November 24th to Sunday, November 27th at Ballybay Hall.

The cast of 11 is looking forward to welcoming people back for an evening of fun and laughter.

“There’s a lot of little fine tuning. That’s what we’re doing in this last week, polishing and fine tuning,” he told the Herald.

“The play was written in the 1960s and like many plays it is set in one room. In terms of plot, without ruining the end, it’s set in London and the people of the house order a chimney sweep and he finds something that’s the focus of the rest of the play. That creates the drama.”

He added that many of the cast were new to the stage in Kiltoom.

“There are about five new people who have never been on stage in Kiltoom and some of them are new to ever being on stage. And that was a deliberate thing to broaden out the group,” he said. The cast also featured a number of younger people, including a transition year student, Mr Hegarty said and he welcomed this positive development.

The fact that the play was the first since the pandemic made it very special, said Mr Hegarty, who has directed approximately 15 plays.

“When the group sat down six months ago in the spring, we said now that we’re coming out of Covid, the one thing we’re going to do is a comedy,” he said. “We actually had a play when Covid broke, Sive. When the first lockdown happened we were going on stage the following week. We were into dress rehearsals the night that lockdown came. We had a fantastic cast and a lovely play. It would have been a great performance. But when we regrouped, we made the decision not to go ahead with that play but to start from scratch with a comedy.”

‘Brush with a Body’ will begin at 8 p.m. sharp on the four-day run and people are advised to arrive early to get their tickets and take their seats, with Saturday and Sunday expected to be the busiest nights. Tickets can be purchased at the door, priced €10 for an adult, €8 for a senior, and €5 for a child. There are no card payment facilities at the hall.