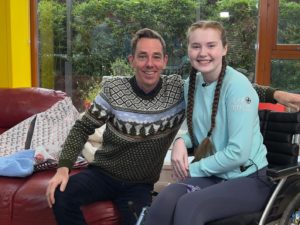 A Roscommon girl has received a surprise visit from Ryan Tubridy and her favourite band ahead of the Late Late Toy Show on Friday evening.

Sixteen-year-old Ella Donlon from The Walk, Roscommon Town, was left speechless when the host of the country’s most famous show visited her in hospital earlier this week as part of the build-up to this year’s edition, which will be watched by millions of people across the globe tomorrow evening.

Ella has been receiving treatment in Crumlin Children’s Hospital for Gastroparesis and related dysmotility and digestive issues for the last 18 months.

Her illness stems from an underlying health condition called Ehlers Danlos Syndrome, a rare disease caused by a collagen deficiency that results in defective connective tissue throughout the body.

Ella revealed that she “loved” the Toy Show and watched it in hospital last year.

“Seeing as you can’t come to us, we have come to you,” Tubridy said as he surprised Ella before presenting her with a number of presents.

And the surprises didn’t end there as Ella’s favourite band, Picture This, made an appearance and gave a special performance of their festive hit, This Christmas.

Ella was joined by her parents and Martina and James, and sisters Cliona and Alanna before revealing that she’s hoping to leave hospital on Monday.

*Watch the video below…