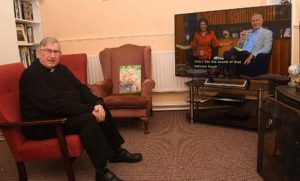 Having spent 52 fulfilling years in the priesthood, Canon Liam Devine retired on July 31st and took up residence in Kilmurry. Now the former PP in St. Peter & Paul, Athlone, and Loughglynn is working on getting his name into the Guinness Book of Records after a near-death earlier this year.

In February, Canon Devine felt ill and was admitted to Mayo University Hospital where he was subsequently transferred to the Coronary Care Unit in Galway University Hospital a day later. He had passed out and come around again, but it was only the start of an ordeal that, in most cases, would have resulted in death.

“It was the day that Roscommon were playing Clare in the National Football League. I was settling down to watch the games on TG4 on Sunday when I passed out again. When I woke up three minutes later, there were doctors and nurses everywhere pounding my chest and giving me CPR. I had a temporary pacemaker fitted before a permanent one was fitted 24 hours later,” he recalled.

Only 12 months earlier, issues with his heart had been diagnosed as a Bundle Branch Block, where one of the network of wires around the heart was blocked. Now Canon Liam had developed Bradycardia, which is a slower than normal heartbeat.

“A normal heartbeat should be between 60 and 100 times per minute. There is a Martin Brady living in London, and his heartrate went down to 27 beats per minute in 1969. He’s in the Guinness Book of Records.

“My heartbeat went down to 21, so I’ll certainly be pursuing getting into the Guinness Book of Records. If it dropped to 20, it was certain death, so I suppose you could say that I was as close to death as anyone could ever be.

“You appreciate life when you have an escape like that. Every day, every passing hour, is a bonus. You thank God for the gift of life. I didn’t realise that I was that close to dying until I thought about it afterwards. The gift of nature, people, friends — everything takes on a new perspective,” he reflected.

*Read Canon Devine’s feature in the Roscommon Herald’s annual Christmas magazine, Festive Herald, which will be in the shops next week.