Roscommon set to be without a number of key players 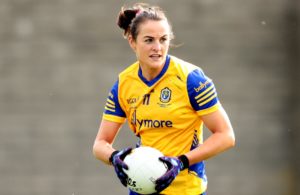 Roscommon are set to be without Jenny Higgins in 2023. Picture: INPHO/Tom Maher

County intermediate ladies’ football manager, Ollie Lennon, will have to plan without a number of key players next season.

After winning the Division Three League title and reaching the semi-finals of the All-Ireland intermediate championship in 2022, a new-look Roscommon team is set to take the field next year.

The Roscommon Herald understands that Roscommon are likely to be missing experienced players like Jenny Higgins, Caroline Conway, Sinead Kenny, Fiona Tully, Aisling MacAuliffe and Mikaela McHugh for a variety of reasons, while Natalie McHugh has been ruled out through injury.

The McHugh sisters, Fiona Tully and Caroline Conway were four of the six forwards that lined out against Wexford in July’s All-Ireland semi-final. Jenny Higgins started at midfield, while Aisling MacAuliffe and Sinead Kenny were part of Roscommon’s defence, meaning that seven of the team that started the 6-11 to 1-9 defeat against the Leinster side at Crettyard, County Laois, won’t be available in 2023.

Roscommon will be playing in Division Two next season, while they will also compete in a very competitive intermediate football championship.