World Cup star with Roscommon roots lines out in Qatar 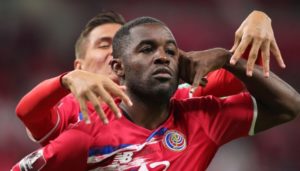 A World Cup star reportedly with Roscommon roots lined out for his country in Qatar on Wednesday.

Striker Joel Campbell and his Costa Rica team-mates suffered a 7-0 humbling against Spain at the Al Thumana Stadium.

It has been reported that that former Arsenal striker’s grandfather was an ex-priest from County Roscommon — a former missionary priest, Fr. Noel Campbell.

Campbell, who made his debut for Costa Rica in 2011, has over 120 caps for his country and has scored 25 goals.