‘There’s something special about your own club’ 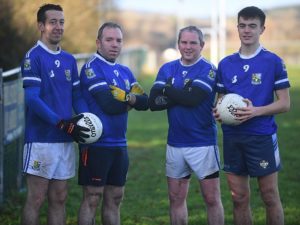 St. Ronan’s defender Michael McNama has detailed the pride he and his team-mates feel when they pull on the famous blue and white jersey.

Ahead of Saturday week’s Connacht junior final against Clifden at Dr. Hyde Park, McNama revealed that the club had come through some tough years, thanks to the spirit among the players and the local community.

“We hit a bad year in 2017. There were lads gone away with work and travelling. A few lads retired. That was the year when things looked particularly bleak. We had a meeting among players on a Friday night, we had a game on the Sunday. We made a few phonecalls and got lads back playing. Over 20 lads togged that Sunday.

“I think when lads realised how serious it was, the whole parish pulled together to make sure that we didn’t fold.

“Did I ever think it was never worth it? Absolutely not. In every county, in every parish, no one would ever want to see a club going under, and we’re no different here. We’re very proud, there’s something special about your own club, your own area,” he highlighted.

“We’re lucky enough that we have great people in the club. We’ve always had good management teams putting in a really good shift. I know there has been a lot of talk about the older lads but there have been a very committed cohort of younger lads keeping it going too.

“We’ve a super bunch of lads here. Every year, we’ve had that bond between the older and the younger lads. It’s hard to walk away from that,” he said.

*Check out next Tuesday’s Roscommon Herald for a special preview on St. Ronan’s date with destiny.