WATCH: St. Dominic’s score contender for Goal of the Season 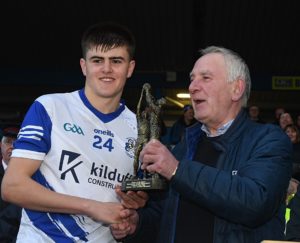 It was a thing of beauty on a dull, damp Saturday afternoon in Carrick-on-Shannon.

St. Dominic’s were 0-8 to 0-3 ahead in their Connacht Intermediate Football Championship semi-final against Aughnasheelin at Avant Money Páirc Seán MacDiarmada when one moment of sublime quality ensured that they were on their way to next weekend’s provincial final against Dunmore MacHales.

When the ball came to Cian Kelly after St. Dominic’s overturned Aughnasheelin in the Leitrim side’s half-forward line, the Player of the Match from the county final set off on a galloping run under the shadow of Páirc Seán’s main stand.

Then, without breaking stride, Kelly put a sublime pass into the path of Daire Keenan who produced an equally exquisite finish into the top corner of the net to give St. Dominic’s an eight-point half-time lead and pretty much assure themselves their place in the final.

A definite contender for Goal of the Season.

Watch the goal by clicking the Twitter link below…