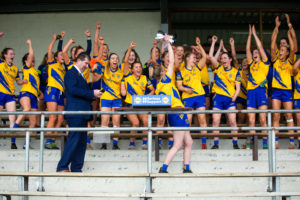 The Roscommon intermediate ladies’ football team appear to have drawn the short straw in terms of league fixtures when they return to Division Two next season.

With four senior teams — Armagh, Tipperary, Cavan and Laois — alongside intermediate sides, Tyrone, Westmeath and Monaghan, for company, Ollie Lennon’s side would have been looking for the comfort of four home games.

However, they will open their campaign on January 22nd away to Tyrone, which will be followed by visits to Tipperary, Cavan and Monaghan.

Roscommon’s home games are against Armagh and Westmeath — managed by former Roscommon men’s player and ladies’ manager, Michael Finneran — before they welcome last year’s All-Ireland intermediate champions, Laois, in the final round of games on March 26th.

A number of experienced players have stepped away from the panel next season, leaving a young team facing a baptism of fire when league action resumes.

Roscommon won the Division Three title in early April, beating Wexford in the final and earning the right to compete in Division Two.

Roscommon name captain and vice-captain for 2023