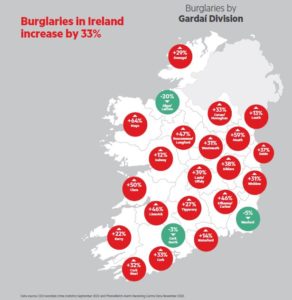 The Roscommon and Longford Garda Division has experienced a 47% increase in burglaries in 2022 compared to 2021, a report by PhoneWatch suggests.

For the report, PhoneWatch looked at 10 years’ worth of CSO Burglary stats along with their own data from their Dublin based Alarm Receiving Centre and some consumer research conducted through Bounce Insights. According to the CSO, in the first half of the year, 87 burglaries took place in the division.

Data published over the past 10 years by the Central Statistics Office reveals that on average 1 in every 10 homes in Ireland has experienced a burglary in that period, with a total of 182,609 burglaries reported nationwide. The 10 year data from the Phonewatch Alarm Receiving Centre shows that those with a monitored home alarm are over 4 times less likely to be burgled, the company said.

Three out of four (72%) Irish homeowners are concerned about a break-in in their homes, with over a third (39%) feeling worried when home alone, according to the report. The time of year has a huge impact on how safe people feel, with over half (58%) feeling least protected throughout the winter months and 64% feeling particularly unsafe at night-time. PhoneWatch urges all homeowners to take the necessary preventative measures and continue to protect their homes and their cherished items inside.

“Although 80% of people have never had a home break-in, or a smoke or fire incident (87%), that doesn’t stop over 40% of us regularly asking our neighbours to check in on our homes while we are not there but this does not deter burglars, as they can be aware that a home is left unoccupied and your neighbours can’t protect your home 24/7,” the company said.

Eoin Dunne, Managing Director of PhoneWatch, said “It’s worrying to see a 33% increase in the nationwide burglary rate and indeed an increase across most counties in Ireland. If this rate of increase was to continue until the end of the year, there would be approximately 11,500 burglaries in 2022. At PhoneWatch, our aim is never to scare or unnecessarily frighten people, but to make them aware of the realities of burglary so that they can take the preventative measures to help prevent such occurrences. Above all else, PhoneWatch wants people to feel safe in their homes. We are reminding all homeowners to take simple but effective steps to help avoid the trauma of a burglary, especially as the dark evenings close in.”