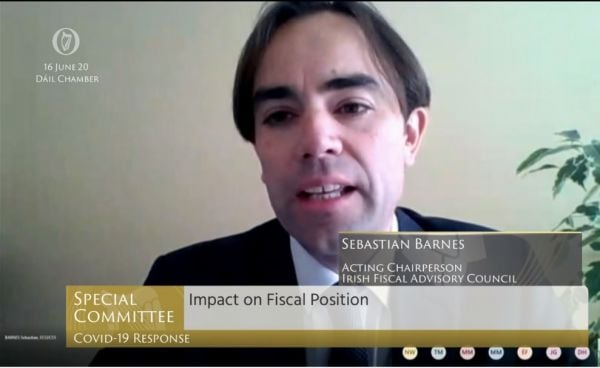 Ireland’s budgetary watchdog has said 2023 will be a “bad year” but in the medium term it expects the economy to recover.

Irish Fiscal Advisory Council (Ifac) chairman Sebastian Barnes warned there are a number of factors that could “tip” the country into a much weaker economic situation.

Representatives from the council appeared before the Budgetary Oversight Committee on Wednesday evening to discuss its recent assessment report.

Mr Barnes said aggregate consumption by all households in volume terms is expected to be “flat from the end of this year through next year”.

“It’s not recessionary territory, because it’s not contracting, but it’s just at the limit of it. And that is the impact of these higher energy prices.

“Now, eventually, as people get used to it as the price has come down a bit, we would expect the economy to recover.

“It’ll be a bad year next year, but in the medium term, under those hypotheses, we would expect things to get better.”

He said income levels “will always be lower than it would have been had energy prices not increased because we are worse off”.

Mr Barnes added: “Energy prices will end up higher, hopefully lower than they are today but higher than they were before. So, there’s a permanent loss of income there.

“That’s just something, unfortunately, we have to we have to live with.”

“So, there’s a lot of factors that could tip us into a much weaker economy.

“Next year will be a bad year, people’s real incomes will suffer in terms of real wages, that will take us back to something like 2019 levels. So, it’s a setback for many people.”

Mr Barnes made the remarks in response to People Before Profit TD Richard Boyd Barrett, who asked whether there was a danger of a recession if inflation is greater than any compensatory measures the Government introduces.

In his opening statement, Mr Barnes said Ireland’s growth has “slowed considerably” over the past months.

“The rapid post-Covid recovery has been stunted by surging prices, mainly from energy and food. This has led to weaker real incomes while the jobs market remains exceptionally tight. It shows some signs of softening, including the digital sector.”

“There are major risks to these projections,” he said. “Gas shortages this winter now seem less likely than perhaps they did earlier in the year, but many challenges remain around energy.”

He also told TDs and senators a window of opportunity exists to reduce Ireland’s debt burden to a “safer” level but the opportunity will be “short-lived”.

“There is now a window of opportunity for Ireland to reduce its debt burden to safer levels while interest costs remain low, despite recent rate rises,” Mr Barnes said.

“Future shocks to interest rates growth or debt will be much more manageable if we start from a lower level of debt, than the one we currently have.

“Sticking to its plans, the Government could see its net debt ratio fall around 73 per cent at the end of this year, to around 58 percentage GNI start by 2025 on the back of budget surpluses, relatively high inflation and moderate growth. This would provide a buffer to help the Government respond to future recessions or crises in the way that it has in recent years.

He said the public finances face “major” long-term challenges. These include pensions and ageing of the population, the costs of climate transition and the need to reduce over reliance on process corporation tax receipts.

He warned the council is “concerned” in budget 2023 the forecasts once again only go to three years ahead which does not allow for proper analysis of the medium-term path of the economy.