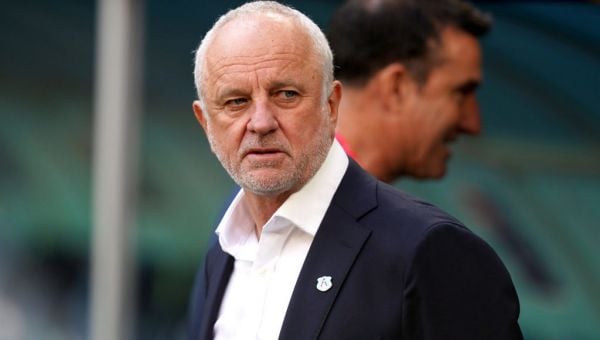 Mathew Leckie’s superb second-half strike secured a crucial 1-0 win which eliminated the Danes to put the spirited Socceroos in the knockout stages for the first time since 2006.

Manager Arnold believes his current crop should now be held in similar esteem and singled out Scotland-born Stoke centre-back Souttar for special praise.

“I’m just so proud and happy, this is what World Cups are for,” he told a press conference.

“When the Cricket World Cup is on, you don’t see Federation Square (in Melbourne) like it is and pubs like they are, or if it’s rugby union, rugby league or anything.

“The World Cup of football unites a nation and I’m just proud that we’ve been able to put smiles on people’s faces.

“It’s the first time ever that an Australian team has won two games at a World Cup in a row.

While Leckie grabbed the glory of the winning goal, Souttar, who has only just recovered from a long-term knee injury, was immense at the back as Australia limited the nation ranked 10th in the world to few opportunities.

“There will be some hangovers and some joy with the Australian fans,” continued Arnold. “It’s remarkable.

“Harry has been out for a year with an ACL, he’s played three games before he came in.

“There’s so much belief in that boy. I know his mentality is so strong. And I tell you what, if I was a Premier League club, I’d be banging on the door real quick, he’s that good.”

Australia began the day in second spot in Group D behind reigning champions France and ultimately finished there following a frantic few minutes of second-half drama.

The Socceroos and the Danes were both briefly heading out of the tournament after Wahbi Khazri fired Tunisia in front against Les Bleus.

News of that development had barely had time to filter through to the Al Janoub Stadium before Melbourne City forward Leckie ran almost half the length of the pitch to finish in style.

Arnold did not know until after the game that Tunisia had triumphed 1-0, a result which meant Australia had to win to progress.

Match-winner Leckie, who also “had no idea” about Khazri’s strike, is now targeting a quarter-final spot – uncharted territory for the Socceroos – ahead of a second-round clash with one of Poland, Argentina or Saudi Arabia.

“We’re all super stoked, everyone was buzzing (at full-time), screaming a lot of nonsense, so much emotion,” he said.

“But we want to dream big and the key when we came to this tournament we always said we want to get out of the group and now we’ve done that.

“But then Arnie (Arnold), the first thing he said was, ‘let’s go one more’.

“With my celebration you saw the emotion. The whole bench was there and I think I got slapped in the head about a hundred times.”

Denmark reached the Euro 2020 semi-finals last summer but leave Qatar having registered only one point and just a single goal.

Head coach Kasper Hjulmand took responsibility for the underwhelming campaign and said he would need time to digest the disappointment.

“I believe that my feelings are too big now to think clearly,” he said.

“There are many ingredients in that pot. For me it’s important to get a bit of distance to it so I can think rationally.

“What is absolutely certain is it is my responsibility that when you come to the World Cup you will reach your best level and we didn’t do that.”

Joao Cancelo: Playing time behind Bayern Munich move, not any problems with Pep