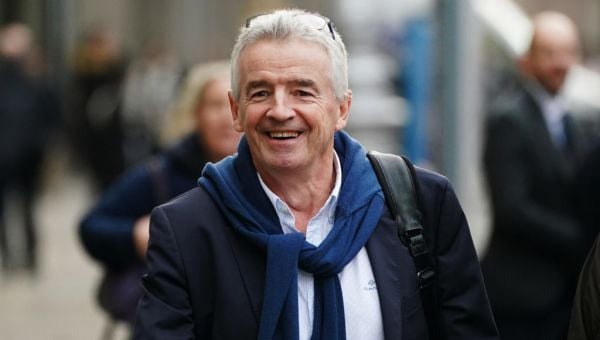 Michael O’Leary has accused the Government of “squandering” funds gained from an EU climate tax on flights on a school bus scheme.

Mr O’Leary called on the Minister for Transport and the Environment Eamon Ryan to “lobby strongly” for the EU to change the “extraordinary” tax rules so that they apply to all flights.

“I think it’s important, while we accept that aviation must pay its fair share, aviation is not the cause of climate change or global warming,” Mr O’Leary told a committee.

He also said the current European Commission leadership “lacks the bottle” of its predecessors “to challenge the vested interests of the national governments”.

Appearing before the Oireachtas Transport Committee on Wednesday, Mr O’Leary laid out his criticism of Ireland’s aviation policy and the use of climate funds charged to Ryanair passengers.

“The most polluting flights to and from Europe are long-haul flights. Long-haul flights to Europe account for 54 per cent of Europe’s aviation CO2 emissions, but deliver 6% of the passengers, and they’re exempt from any environmental taxation whatsoever,” he said.

“It is grossly inequitable that poor Irish passengers or price-sensitive passengers travelling to the peripheral countries of Europe pay an inequitable burden of environmental taxes, where the richest people on long-haul flights are the people causing the most environmental damage – those taking two flights to get to their destination instead of one – are exempt.

“This needs to be challenged.”

The Ryanair Group chief executive also accused the Irish Government of “squandering” climate revenues charged to its customers on a school bus programme.

Mr O’Leary said that around €4.50 in environmental taxes is charged per passenger on a Ryanair flight worth €40, equivalent to 12 per cent of the fare.

But he said he is “very concerned” about what is done with those tax revenues, saying that “…astonishing volumes of environmental revenues have been squandered on school bus fleet and unidentified climate finance projects”.

Mr O’Leary added: “I would urge the committee just to investigate what is going on with the Department of the Environment on their ETS (the EU’s Emissions Trading System) revenues.

“Over 70 per cent of this is being squandered on the school bus fleet, which is neither environmentally friendly nor particularly fuel efficient.”

He said that Ryanair had written to the department about how €140 million in funds gathered over three years has been used, adding: “…when somebody’s not answering your question, they use words like ‘an amount equivalent to 100 per cent of Ireland’s ETS revenues has been attributed to emission reduction activities’”.

“Now, we know when people are speaking in French, and that is classic French,” Mr O’Leary said.

He added that Ryanair is investing $22 billion in new aircraft that will have 4 per cent more seats but burn 60 per cent less fuel.

“We don’t begrudge the school bus fleet the money, you know, but it shouldn’t come out of monies that Ireland is telling Europe we’re going to spend on environmental measures.

“The aviation industry is challenged. We do need to work to come up with more sustainable aviation fuels in our airports.”

“Here in Ireland, I would say the absolute number one blocker for getting people here is accommodation. There is no accommodation, there is zero accommodation and in the Swords area yesterday there was about six houses for rent,” Mr Wilson said.

“I never thought we’d have a situation where we can’t get people to come to Dublin because they have nowhere to live.”

Mr O’Leary said Ryanair had emerged from the Covid-19 pandemic with “a very strong balance sheet”, with air traffic at 168 million, 13 per cent above pre-Covid levels.

He said Ryanair expects to grow by another 60 million passengers a year over the next four years.

“We want to put up to 25 per cent or 15 million of that additional capacity here in Ireland, if the environmental policies and cost policies are favourable towards continuing to stimulate growth to and from peripheral EU member states such as Ireland.”

Hitting out at the “Dublin Airport monopoly” returning to “bad habits” after the pandemic, the Ryanair boss said plans to “waste” €200 million on a tunnel under a taxiway at Dublin Airport were “unnecessary”.

He added: “A tunnel under a taxiway that is absolutely unnecessary in Dublin Airport that no airline needs and certainly doesn’t serve any customer. We’re back to gold-plating or wasting expenditure here so they can inflate the regulated charges at the airport.”

The appearance comes after committee members’ visit to the Dutch airports Schiphol and Rotterdam as part of their examination of Ireland’s aviation policy.

The Department of Transport and the Environment has been contacted for comment about Mr O’Leary’s comments on the school bus programme.