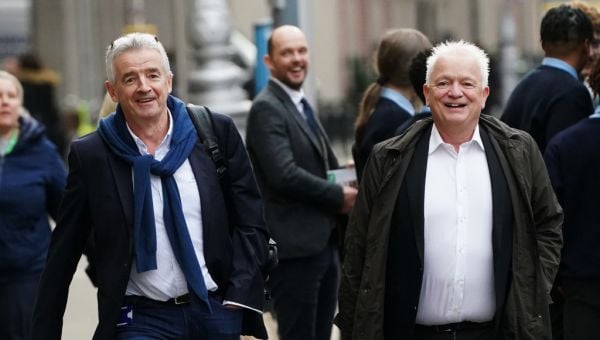 During a committee appearance before Irish politicians, the budget airline boss suggested that air traffic controller strikes happen on a Friday so that workers can get a three-day weekend.

Among the various charged comments he made during a three-hour committee appearance, he called on the European Commission to change laws so that only domestic French flights would be affected during air traffic controller strikes and that overflights would be protected.

Mr O’Leary also called on the proposed single European sky to be implemented, but said the European Commission “lacks the bottle” that earlier commissions had “to challenge the vested interests of the national governments”.

In July, flights from French airports faced disruption as airport workers went on strike to demand salary rises to keep up with inflation.

They also called for a recruitment drive to deal with resurgent travel demand, which has put both airports and airlines under pressure this year after jobs were cut during the Covid-19 pandemic.

“Many times, French air traffic controllers go on strike not because they want more pay, it’s because they don’t like (French President Emmanuel) Macron, or they didn’t like the result of the football match… it’s recreational striking.

“All the strikes generally take place on Fridays, and then they don’t show up to work on the Saturday so they have a three-day weekend.”

“So, the French are all happily flying around the place. But it’s the poor Irish, the Spanish, the Italians and the Germans who are taking all of the cancellations.

“Our people, our citizens, our visitors are being completely screwed over while a bunch of French air traffic controllers go on strike – and we fully respect their right to go on strike – but let the French take the hit.

“It shouldn’t be Irish, Germans, Italians and Spanish who are not travelling to France (who) take the hit.”

He added: “It is bizarre that Europe’s free movement of people across Europe in a single market is allowed to be threatened by the French every time they have these recreational strikes, which they have frequently in the summer.”

Mr O’Leary then called for a single European sky to be implemented – a proposal from 2001 – and accused the European Commission of not having the courage to implement it.

“In other words, they move to the same air traffic control system as America has, one system operate by all.”

“The difficulty is that it’s opposed by every single air traffic controllers’ national union because it means less jobs for them, and therefore they can’t get national governments to agree to it.”

He added: “The European Commission lacks the bottle that those earlier Commissions had to challenge the vested interests of the national governments.”

“Nobody will European Commission wants to challenge the French government or the German government, even if it’s in the interests of the vast and overwhelming majority of European citizens and passengers.”