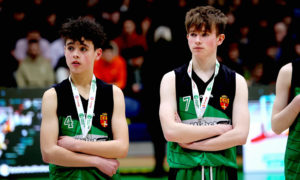 Castlerea Community School’s bid for All-Ireland basketball honours came up short when they were well-beaten by St. Finian’s College, Mullingar, in this afternoon’s Pinergy All-Ireland U-16 Boys’ C Cup final at the National Basketball Arena in Tallaght.

The team, coached Joe Henry and Thomas Callaghan, could never get going against a dominant St. Finian’s side who eventually prevailed 58-33.

The West Roscommon side found themselves trailing by 15-9 at the end of the opening quarter, and despite some big scores from Jamie Dowd, that gap widened to double scores, 30-15, at half time.

MVP Ryan Bell and Rian Keaveney of St. Finian’s proved too hot to handle as they combined for a total of 37 points.

The Westmeath school continued to dominance, despite the best efforts of Dowd (8), Seán Vaughan and Dara Curran who contributed six points apiece.

By the three-quarter stage, St. Finian’s were 45-27 ahead as they ran out comfortable winners by 25 points 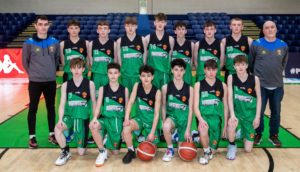