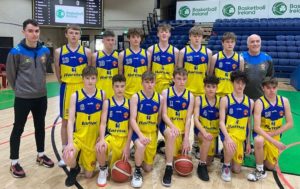 A County Roscommon school will travel to Dublin this morning (Wednesday) with All-Ireland basketball glory on the mind, as Castlerea Community School hope to crown a hugely successful season on the court with victory over St. Finian’s of Mullingar in the Pinergy U-16 C Boys’ final, scheduled for a 12 p.m. start at the National Basketball Arena in Tallaght.

Wins over Merlin College of Galway, Coláiste Oiriall of Monaghan and Dublin’s Scoil Catríona have got Castlerea CS to this stage of the competition, and it was in that semi-final, a 30-20 win over the Dublin opposition, where the West Roscommon side really showed their best form of the year.

“What pleased me most about that game was that it wasn’t the players who had been our high scorers all year that stepped up, it was different guys who rose to the occasion and got us through the game. Jack Dolan was outstanding on the fast break, he brought great pace to our game and finished his lay-ups for scores, while Ross Flynn was very good as well,” recalled Thomas Callaghan, coach and teacher with the school.

“All year long we’ve had different players make the difference for us. We started with a clash with Merlin College of Galway, a team we’ve played a good few times, and while we beat them last year at the second year competition, they since added two Transition Year students — a six foot three forward and a six foot six centre — so they were always going to be a tough test,” added the Castlerea Cavaliers player.

“Jamie Dowd scored well that day as we worked our way through by just four points, and then against Coláiste Oiriall, it was a masterclass from Kevin Hester at point guard that did the trick. He really controlled the floor, brought other players into the game, and set up our trip to the semi-final,” he continued.

Joseph Botton, Dylan Keane and Dara Curran have also performed well for the group at various stages. While the Castlerea school really cut loose in that quarter-final win, scoring 52 points against the Monaghan Gaelscoil, it was back to basics against Scoil Catríona.

“Strong defence is the identity around which we’ve built this team,” revealed Callaghan.

“There are other teams out there who will be bigger than us, and they might have players with a little bit more experience than us — for example St. Finian’s have a few lads who have been selected for Ireland squads at different ages — but we want to make sure that no-one will outwork us, and that we do all we can to run the floor both ways, and make life tough for the opposition.”

In the absence of many other school teams in the area, Castlerea CS have continued their preparations for this final with a series of games against club sides such as Mohill and Longford, as they finalise their preparation for what should be a fascinating contest in south-west Dublin.

Hopefully, they can bring All-Ireland glory west of the Shannon later today.