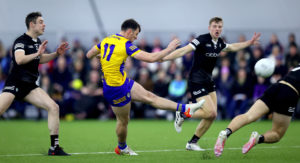 There are five changes to the team that defeated Sligo in the semi-final last weekend.

Conor Carroll replaces Colm Lavin in goal, while Tomás Crean from Creggs comes into the full-back line. Conor Daly is named as wing-back, while Cian Glennon and Ciaráin Murtagh are selected in the half-forward line. Colin Walsh, Donie Smith and Peter Gillooly are named among the substitutes.

Diarmuid Murtagh has been named as captain for the evening.

Meanwhile, Mayo senior football manager Kevin McStay has made six changes to his starting 15 for the game.

Colm Reape (goalkeeper), Enda Hession, Conor Loftus, Diarmuid O’Connor, Bob Tuohy and 2021 All Star Ryan O’Donoghue come into the team from that side that defeated Galway in the semi-final.