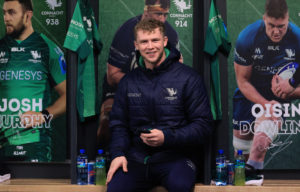 One of Connacht Rugby’s most burgeoning talents has signed a new two-year deal with Connacht.

News of Niall Murray’s new deal with the western province has been confirmed this afternoon.

The Brideswell native made his debut in December 2019 and has gone on to make 47 appearances for his home province.

He was also a part of the Ireland U-20 side that won a Grand Slam in the 2019 Six Nations.

“I’m really pleased to sign a two-year contract and extend my stay at my home province. The club gave me my first opportunity and since then I’ve loved every minute. Now I want to do everything I can to keep improving and helping the club succeed,” said Murray.

Director of Rugby, Andy Friend, said that Murray was a “brilliant young professional” and that his game was going from strength to strength.

“He’s always had a natural athleticism about him, and recently he’s added extra physicality and bulk to his game. He’s becoming one of our key forward leaders too, so we’re delighted to see him commit to Connacht for at least a few more years.”

Niall and his younger brother Darragh have made a huge impression on the western province’s side, especially over the last six weeks when both have played for Connacht at the same time.

Many rugby pundits have tipped Niall for an international call-up soon, given the impressive nature of his performances this season.