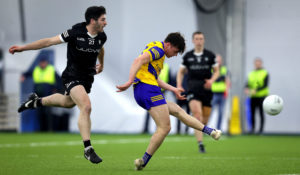 Ben O’Carroll is set to be involved in Sigerson Cup action for UCD this evening, but will he line out in Roscommon colours tomorrow evening?Picture: INPHO/Ryan Byrne

Davy Burke’s pre-season preparations with Roscommon have been further impacted by the rescheduling of a number of Sigerson Cup games this evening.

Roscommon are due to play Mayo in Friday evening’s FBD Connacht final at the University of Galway Connacht GAA Air Dome, but up to eight of his panel could be involved in Sigerson Cup action later this evening (Thursday), meaning that they could be involved in two games in just over 24 hours.

Sigerson Cup games were postponed earlier this week because of the current cold snap, but have been rescheduled this evening

UCD trio Daire Cregg, Ben O’Carroll and Ciarán Sugrue are in action against a University of Galway side that contains Conor Carroll and Darragh Heneghan.

Maynooth University, where Burke is also manager, take on MTU Cork. The Maynooth side is likely to feature Oran duo and brothers Colin and Darragh Walsh who have been picked at full-back and centre-forward respectively.

Tomás Crean from Creggs has been picked for DCU for their game against Queen’s.

Following last week’s victory against Sligo, Burke labelled pre-season competitions like the FBD as “completely unnecessary”, and the demands being placed on some of his players over the next two days is unlikely to change that view.