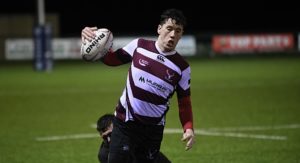 Mark Purcell and his Creggs team-mates have been in great form this season. Picture: Gerard O’Loughlin

It’s a big weekend for Creggs RFC as they face old rivals Connermara in the quarter-final of the Connacht J1A Cup on Saturday evening.

The match is sure to draw a huge crowd to The Green in Creggs for the 7 p.m. kick-off.

Creggs have been flying high this year and are currently sitting on top of the Connacht J1A League.

Last weekend, they got their cup campaign underway with a comprehensive 61-19 victory against Corinthians at The Green.

In the other quarter-finals, Galwegians host Ballinrobe, Tuam meet Dunmore and Westport face University of Galway.