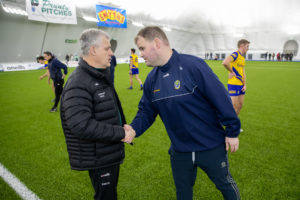 Mayo just about managed to keep Roscommon at bay to claim their first FBD League title since 2012 at the University of Galway Connacht GAA Air Dome this evening.

Kevin McStay saw his team prevail by 0-13 to 0-9 against his former side but, arguably, his counterpart, Davy Burke, took more out of the game as a solid defensive showing was undone by erratic shooting.

Marrying that defensive improvement with greater accuracy up front will be top of Burke’s bucket list before Tyrone come to the Hyde on Sunday week.

The opening half went against the grain of previous high-scoring games at Connacht GAA’s spectacular indoor facility.

Roscommon had to wait 21 minutes for a score when Niall Daly split the posts. By the time Diarmuid Murtagh doubled his side’s tally with the last action of the opening half, his side trailed by 0-5 to 0-2 at the break.

Both sides emptied their benches in the second half with Conor Cox and Donie Smith making an impact for the Rossies with four points between them.

But Roscommon could never get back on level terms and late points from Cillian O’Connor and Conor Loftus edged Mayo, who lost Rory Brickenden to a second yellow card in the closing minutes, over the line.