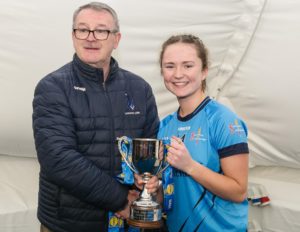 A Roscommon school is celebrating provincial football glory after being crowned Connacht champions on Thursday (yesterday).

The Convent of Mercy, Roscommon Town, defeated St. Attracta’s, Tubbercurry, in the Lidl Connacht LGFA Senior B final at the University of Galway Connacht GAA Air Dome to win the school’s first senior ladies’ football title at senior level since 2009.

That particular team, managed by Seán Boland, went on to complete the All-Ireland double in Gaelic football and soccer at A level. Thursday’s crown was the school’s first B success since the late nineties.

“There’s a big turnover of players from last year. It’s quite a young side with only eight Leaving Certs on the panel,” team manager David O’Reilly told the Roscommon Herald.

The Convent of Mercy prevailed by 2-11 to 1-12, thanks to goals from captain Aisling Hanly and Siofra Hession. Despite three players being sin-binned over the hour, the Roscommon Town school dug deep and prevailed, sparking off scenes of jubilation afterwards.

The Convent now meet Ulster opposition in the All-Ireland semi-final. Details of that game have yet to be confirmed.

The Convent of Mercy senior football squad alongside manager David O’Reilly that landed provincial honours at the University of Galway Connacht GAA Air Dome on Thursday.