Creggs through to last four of Connacht Cup 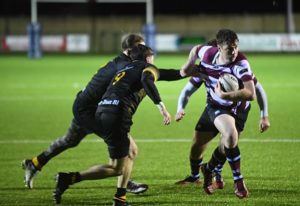 Centre Eoghan Coyle was among the try scorers for Creggs this evening. Picture: Gerard O’Loughlin

Creggs have qualified for the semi-finals of the Connacht J1A Cup following a terrific 14-12 victory against old rivals, Connemara, at The Green this evening.

A huge home crowd turned out to cheer on the home side who are looking to win the competition for the first time in 30 years.

With the wind behind them in the opening half, Creggs set out their stall with the opening try by Eoghan Coyle after great hands from Brian Diffley off a lineout.

The winners stretched their advantage when a brilliant break by Shane Purcell was finished off with Ronan Dowd crossing the whitewash. Both tries were converted by Purcell to give his side a 14-0 interval lead.

As expected, Connemara came thundering into the contest in the second half and pared back the deficit to 14-12 with 12 minutes remaining.

But Creggs held on to confirm their standing as one of the top junior teams in the province this season.