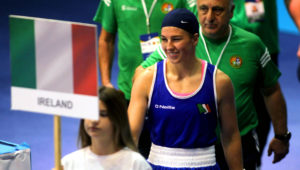 Aoife O’Rourke will be in action at the Elite Boxing Championships in the National Stadium later this evening.

Olympian and European champion Aoife O’Rourke will be looking to retain her Elite Championships boxing title when she enters the ring in the National Stadium later this evening.

The Castlerea fighter faces Aoibhe Carabine from Geesala Boxing Club in the final of the 75kg division between 8 p.m. and 9 p.m..

It will be Aoife’s first competitive bout since retaining her European Championships title last year.

The Elite Championships are seen as a stepping stone towards being picked on the Irish team for the Olympic qualifiers later this year.

Aoife’s sister and world champion, Lisa, was unable to compete in the Elites through injury.