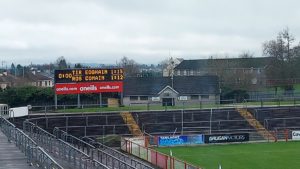 Following the decision of a host of players to step away from the panel for 2023 for a variety of reasons, Lennon had six players making their senior debut for this game, and they settled right in at this level, particularly in the first half when Roscommon were arguably unlucky to only be level at half-time, 0-7 apiece.

Laura Fleming was exceptional in setting the tone in terms of running and work rate, Niamh Feeney operated the sweeper role very well, while Aisling Shanagher filled the full-back berth brilliantly, winning turnovers and providing security in that pivotal position.

Points from Fleming and Aoife Gavin opened the second half on a positive note for the Rossies, but Tyrone’s decision to switch Niamh Hughes into the full forward line proved crucial as she took advantage of a strong run from Aoibheann McHugh to score the first goal of the game, and she probably should have added another, but instead fired her shot from 12 metres out straight at Helena Cummins.

Tyrone kicked on to lead by six points thanks to a strong contribution from Maria Canavan off the bench, but Roscommon were handed a late lifeline when Róisín Wynne set up Laura Fleming for a close range goal, and the away side mounted one more attack. Despite enjoying plenty of possession around 30 metres out from the Tyrone goal, Roscommon couldn’t find their way through the massed defence however, and they had to settle for a late free from Aisling Feely, and one last chance to win possession.

Aoibheann McHugh was able to collect the kickout and set up the last attack of the game, culminating in an insurance point for Niamh McElduff.

For a full report, match details and reaction from this game, see Tuesday’s Roscommon Herald.

Roscommon name captain and vice-captain for 2023