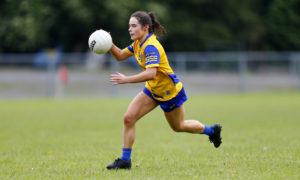 Roisín Wynne will line out in the Roscommon half-back line this afternnon. Picture: INPHO/Ashley Cahill

Roscommon intermediate ladies’ football manager Ollie Lennon has picked a much-changed side for the opening round of the Lidl LGFA Division Two League against Tyrone in Healy Park, Omagh, this afternoon.

There are only six survivors from the team that started the defeat to Wexford in last year’s All-Ireland intermediate semi-final — Helena Cummins, Rachel Fitzmaurice, Roisín Wynne, Laura Fleming, Aisling Hanly and Niamh Feeney.

Five players from last year’s intermediate football champions, Boyle, make the cut, including Aisling Feeley who was Player of the Match in last year’s final against St. Ciaran’s.

Roscommon were promoted to Division Two after winning the Division Three title last year, and Ollie Lennon is hoping that his new-look team will embrace the challenge.

“It is a big turnover of players, and we’ve lost a lot of experience. But we’ve brought in a lot of new blood. We’re delighted with the players we have. The appetite among these players that want to play for the county is very encouraging from our point of view.

“We know that there’s a big test coming for the players and management on Sunday. No one in the group has played in Division Two before, so we know what’s coming down the track.

“Realistically, there are going to be a lot of players making their debut against Tyrone as a result of the big turnover from last year. We could have up to eight players lining out in the league for the first time. It will be a huge ask for them but as a management team we’re hoping that whoever ends up playing on Sunday will have been prepared enough to ensure that it’s not a daunting task for them. We want them to enjoy the occasion and embrace the challenge,” he said.