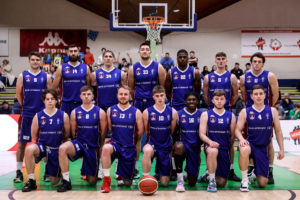 The University of Galway Maree squad, including Paul Freeman (back row, third from left), that captured the InsureMyHouse.ie Pat Duffy Cup on Saturday evening INPHO/Ben Brady

A County Roscommon native lapped up the biggest victory in his basketball career at the National Basketball Arena in Tallaght last night.

Paul Freeman, who plays Gaelic football for Éire Óg, was part of the University of Galway Maree squad that captured the InsureMyHouse.ie Pat Duffy Cup for the first time in the county’s history following a sensational 74-69 victory against DBS Éanna. They also became the first team to bring the Pat Duffy Cup west of the Shannon since 1996.

Jarret Haines was MVP with 35 points, but 39-year-old Freeman also played his part by making an impact off the bench.

“It was in the balance in the second half. Then Jarett (Haines) stepped up and won us the game. He made some incredibly tough shots that only he can make. A well-deserved MVP and a well-deserved win for us,” a delighted Freeman told Galway Bay FM.

“I’ve been playing 23 out of 39 years Super League or Division One. I have every runners-up medal except for the Super League, and I didn’t want that one. So, it was a big job from everyone to make sure we got the winners’ one today,” he said. 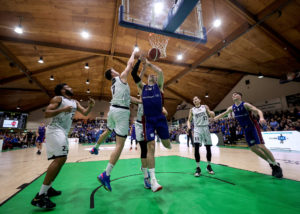